I just spoke to support. The problem could not be solved there now.
Many complain about bad surfaces when support is used. A look into the slicer shows the problem.
I've also looked at other projects, it's the same.
After supporting the object, prusaslicer creates a first surface layer that has large gaps. The second object layer is back to normal, as is the last support layer. ONLY THE FIRST object layer has this gap between the lines...hmm..


If you zoom in very close in the slicer, you can easily see it when you switch back and forth between the layers.

This is how terrible surfaces come about. There is no point in shortening the Z distance. The space between the lines of the first object layer remains, and you can see that.

I don't know how to adjust it, spent hours... Josef, I think it's obviously a software problem that should be fixed.
Images: Photo of a print (object surface at right side)  and a mixed screenshot with the last support layer, and the first object layer. You can clearly see the gap in the first object layer, which is responsible for the poor surface. 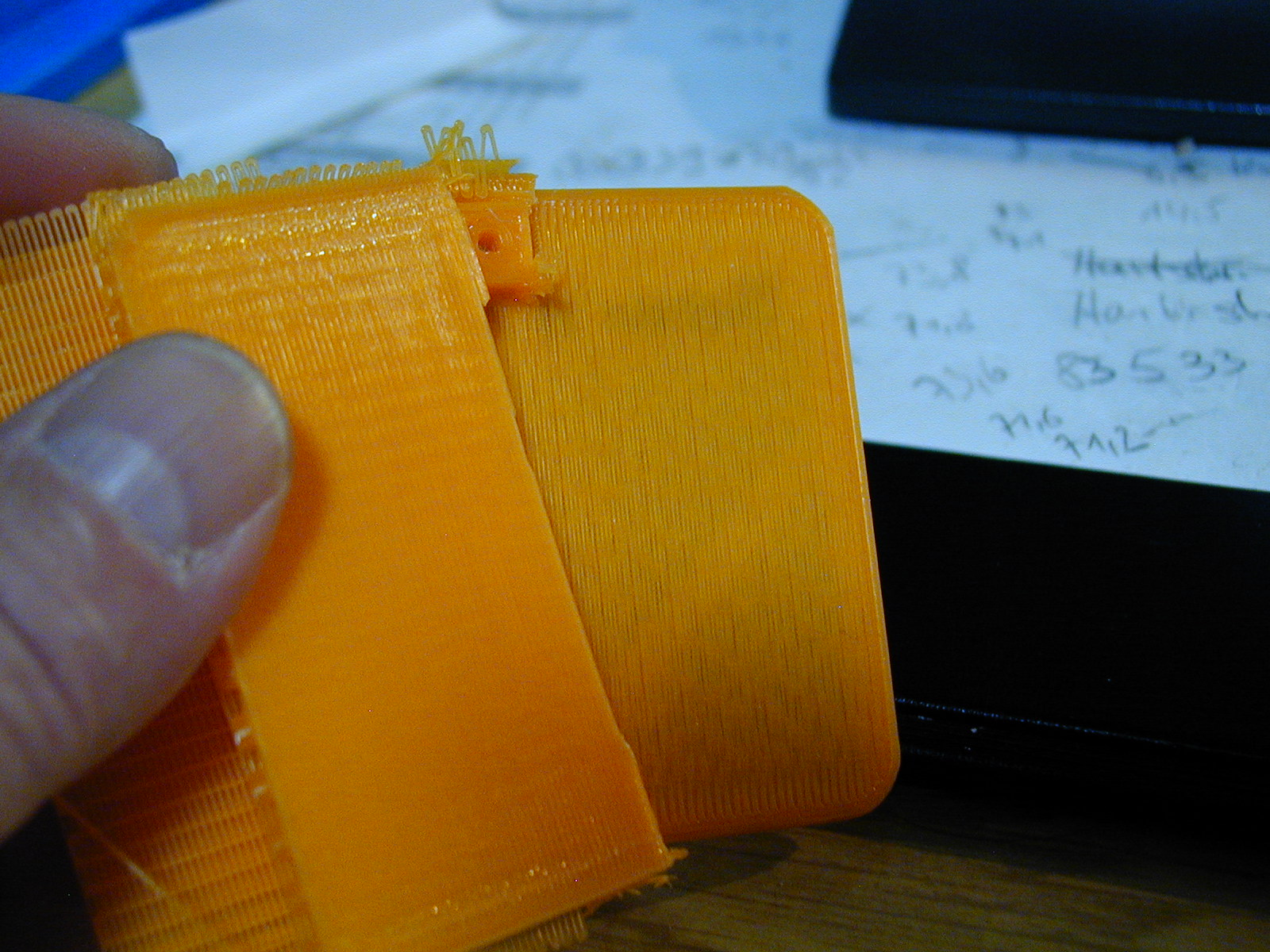 PrusaSlicer is not the best for bridges and supports, particularly that first normal layer above the support.

There's a fairly recent post with comparison photos with PrusaSlicer, Cura, and two others.  PS was, unfortunately, the poorest of the four.

I know... But when you want to use the MMU you have to use it.

I have the impression that prusaslicer is a beta in terms of object support. Cura is decades ahead. I can neither show nor sell parts printed with Puraslicer support to customers.

The high density of support that is generated is nonsense in my opinion.

If the last support layer and the first object layer were at least crossed, instead of exactly on top of each other, that would be a start.

You can at least make sure the support is at 90 degrees to the bridging layer to aid in support removal by changing the support angle.

That doesn't change anything, the gap between the first-layer-lines is still there. Only that part of the first layer may also tear off.
This has been the case for years, see older posts. It only occurs when there is support underneath.
Everybody can see it in layer view.

@Josef: Who actually programs the software ???

Hi Antonius,
the developers use Github, for change requests, could you please raise this issue on the github page for Prusa Slicer.

I try to make safe suggestions,You should understand the context and ensure you are happy that they are safe before attempting to apply my suggestions, what you do, is YOUR responsibility. Location Halifax UK...
Log in to be able to post
Posted : 19/09/2020 10:57 pm

Joan, Hi, I bought a Prusa + MMu2S.
And have to use Prusaslicer to get the prusa product working.

And so I expect from prusa that things work properly.
If I see an error, I am happy to report it.

But I don't register externally anywhere else or have to ask someone for help anywhere.
This is not my job. I'm a paying customer. Here's the place.

You are mistaken. This not the place. It a user fourm. Peer to  peer user not CRM.

Instead of arguing with the mod:

This is probably a better place: https://github.com/prusa3d/PrusaSlicer

Instead of arguing with the mod:

This is probably a better place: https://github.com/prusa3d/PrusaSlicer

No! forum.prusaprinters.org is the place for prusaslicer. You can discuss this at another time.

--> "PrusaSlicer (formerly known as Slic3r Prusa Edition or Slic3r PE) is our own in-house developed slicer software based on the open-source project Slic3r."

😴 However, I still have no feedback from customer support... Do I have to make a YT video about that rubbish Prusaslicer does?
😡  JOSEF! How long will it take until this problem is rectified? It is almost time. I didn't buy the equipment for fun.

No! forum.prusaprinters.org is the place for prusaslicer. You can discuss this at another time.

Bark at the moon if you want. The Prusa development team monitors GitHub regularly. They poke in here on occasion, but will usually suggest opening issues on GitHub. This is a user-to-user forum.

--> "PrusaSlicer (formerly known as Slic3r Prusa Edition or Slic3r PE) is our own in-house developed slicer software based on the open-source project Slic3r."

And you'll notice it is maintained on GitHub: https://github.com/prusa3d/PrusaSlicer

😴 However, I still have no feedback from customer support... Do I have to make a YT video about that rubbish Prusaslicer does?

That's probably your best bet. I'm sure your video will get many views. Be sure to put a lot of effort into the production.

My notes and disclaimers on 3D printing and miscellaneous other tech projects
He is intelligent, but not experienced. His pattern indicates two dimensional thinking. -- Spock in Star Trek: The Wrath of Khan...
Log in to be able to post
Posted : 09/10/2020 8:02 pm