This seems to be the place with the most active MMU users as far as I can tell, so I just thought I'd post a rough concept for opinions.

I've had the MMU2S for over a year and have eventually dialed it in to the point where it works pretty well with standard PLA and PETG, but I still get load and eject errors occasionally. I've done a lot of tuning, testing, and some of the common modifications to get it to this point, but can't seem to eliminate the occasional failure (threaded connectors on rear, better buffer, Leds on the sensors, chamfered entry holes, etc, etc.). Also, because multicolour prints tend to be long and usually have to run my machine unattended for long prints. The MK3S is ultra reliable and I pretty much never have failed prints in single colour. I probably use the MMU more for spooljoin and just as a filament selector, but it's great to have the option for multicolour as well. I've looked at the palette and though I'd be willing to pay their price for a reliable solution, it doesn't appear to be any better.

My issues seem to almost always stem from the selector. Even when using the machine in single mode, I get occasional weird issues when switching or even just loading the same filament I just used.  My Idler /  drive setup seems solid.

I definitely want to keep the machine as a direct drive and I really like the Prusa design of using a stepper to hand the filament off to the extruder stepper.  My thought was to use the stock idler/ drive system (Or a similar design, or 5x individual steppers) then just eliminate the selector mechanism with a 5 to 1 adapter and also add in a mechanism that trims every tip during retract to just eliminate poor tips as an issue and make the unit reliable with any (or at least most) type of filament without having to worry about retract speed and temperature.

I spent a few minutes in Fusion to mock up a rough concept of the mechanism that would replace the selector with the idea of reliability in mind, and ignoring cost and form factor for now. It would require either 2 steppers/servos, or more likely a mechanical linkage between the steel cutter and the guide that opens to drop the tips, but would not use the selector servo. Would require a couple custom steel pieces for doing the tip trimming and obviously some programming.

The feed system would be on the left and the right would go to the extruder assembly on the printer.

Just curious if anyone has any thoughts or any alternate ideas? 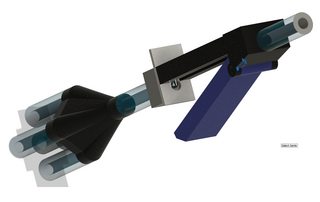 RE: Has anyone tried a major design change to eliminate the selector? (Combination of MMU and MMU2)

If I am understanding you correctly, what you describe is essentially what the original MMU was (4 bowden motors driving filaments to a 4-1 unit that was attached to the extruder).

The main issue with separate bowden systems is that you have a separate motor for each filament. I suppose, however, you could keep the MMU2 idler design (or something similar) and have it feed a 5-1 join. Then place the FINDA just ahead of the join. You would just need to update the firmware to ignore the selector commands and possibly adjust some distance values (e.g. how far to retract from the FINDA on unload.

The big downside I see here is the amount of extra space that would be needed. You'd also run the risk of tails from one filament causing problems for another.

RE: Has anyone tried a major design change to eliminate the selector? (Combination of MMU and MMU2)

Do a Facebook group search for MMU2+1s. They did this and have custom firmware