I was influenced by the LACK enclosure design but did not like the idea of putting my printer in a glorified cardboard box. Especially above and below the printer I wanted metal. Interestingly, IKEA sells a shelf sytem named Bror. One of the smaller configurations is fairly similar to Lack dimensions, same depth, 10 cm broader and higher and made entirely from powder coated steel.

I fitted the shelf with lots of tailor made PETG printed elements and added PMMA sides and doors as well as an outlet air filter and ventilation to create a slight underpressure inside, reducing leakage, to at least reduce emissions while printing. PSU is external.

PS: Bror is actually Made in Czech Republic. I found that quite fitting.

What size of shelf are you using? Looks like the 65x55x110 cm version!?
Is it possible to put this on castors to move it around?

And what kind of tailor made elements did you make? Would you post some detail shots?
I also notice you remounted the PSU outside at the back – correct?

And which kind of spool holders are you using?
I started to use the "Gravity spoolholder for MMU2S" and found it to be working quite nicely.

Also the Ikea Ledberg 4-spotlight pack is a nice add-on for any case.

Yes, It is the 65x55x110 cm version. I bought the 110cm posts and 4x the 65x55cm shelf. The 4th I actually used as back wall, closing the remaining top slit with NBR bands (I bought them from this shop which is really great, offering almost any dimensions you want).  NBR is a bit stiffer than EPDM and more heat stable, but EPDM should work as well. Don't use Neopren bands as that material produces hydrogen chloride when melting. (NBR or EPDM fumes shouldn't be inhaled either of course but at at least they don't emit hydrogen chloride gas on top of butadiene)

I also used NBR bands at the top and bottom interfaces of the PMMA plates to the frame and where the top shelf is resting on the frame (the enclsoure is not completely airtight, especially at the doors but tight enough so that the air exhaust filter works properly). Printed triangular pillars for each corner hold the PMMA plates, close the holes and create a smoother finish as well as hold the doors at the front corners. My design is probably more complicated than it needs to be as I tailor laser cut PMMA plates. They are not simply plain rectangular, even if they look like it. I am pretty sure one could design it in a way that rectangular plates as ordered could work as well though.

I am a bit hesitant to post the models for my inlets as I have a terrible design discipline and post processed some prints instead of optimizing the model (too narrow screw holes etc). Especially at the doors I also needed to grind away 1-2 mm from the PMMA plates to make them work fine. I can upload the model though, as is, and tell you what I modified after printing, if it helps.

Theoretically castors might be possible. The overall weight of the whole setup is probably around 30 kg + 5 kg if you load all five spools. So this needs to be considered. Maybe castors like those would work: https://www.bauhaus.at/lenkrollen/stabilit-apparate-lenkrolle/p/10138068. One could screw them in place if you drill the needed holes into the posts.

Half that weight comes from that black stone plate (40cmx40cm) below the printer. It helped a lot, preventing the shelf from acting like a loudspeaker for the printer vibrations. It also stopped the shaking of the printer together with slightly modified support beams for the shelf the plate is resting on. By default you mount one support beam in the very centre. I took however 2 additional support beams from the other purchased shelves, bent away the small spike that arrests the beam in the original setup and then simply quenched in those two additional beams so that there are now 3 beams supporting the shelf, two of them roughly below the sides of the stone plate.

Yes, the PSU is mounted externally. That was far easier than anticipated. All it needed was drilling holes in the shelf to exit the cables and two holes in the post at the back. 2 screws are connecting to those holes and on the upside one can simply use the two screw sockets to clinch in the frame between PSU and two screws. that holds quite well. I also made a tailor made PSU cover at the front, as I integrated my enclosure air filter control there. The stock cover does work fine as well though.

The spool holder I am using is based on the Universal Spool holder design ( https://www.thingiverse.com/thing:3338467) with stiff springs printed in Prusament PETG (the softer ones, simply didn't have enough torque with PETG). The spool holder frame is custom designed and I also have two guiding sticks per spool to prevent mislocation of the filament. One should be able to use any rewinding system which is suitable for being put below the printer though.

Here are some close-ups for illustration: 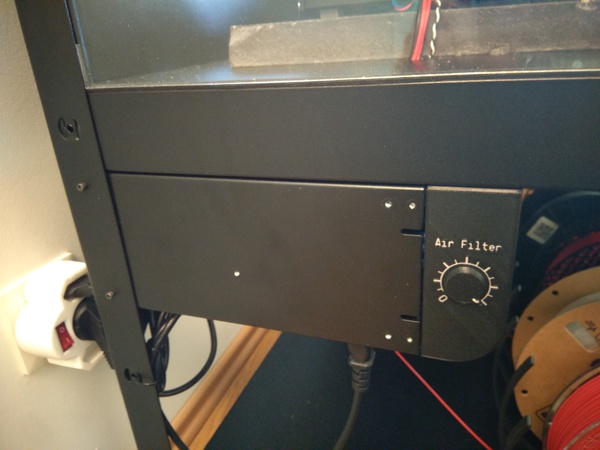 The shelf support (the aluminium U-profiles really aren't necessary, they were my first attempt of stabilising the shelf. It is the black profiles from IKEA that really support the shelf well, if you use at least 3 of them) 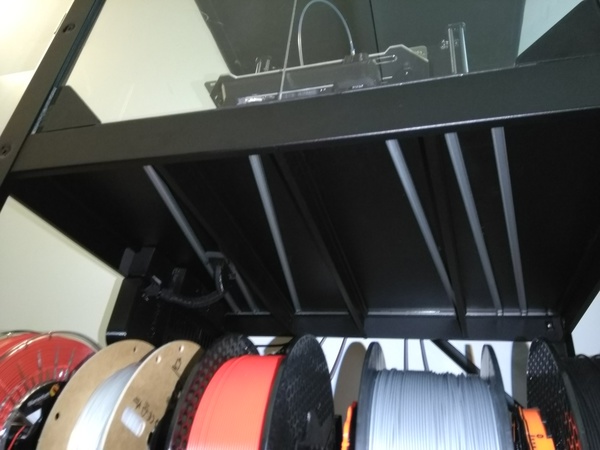 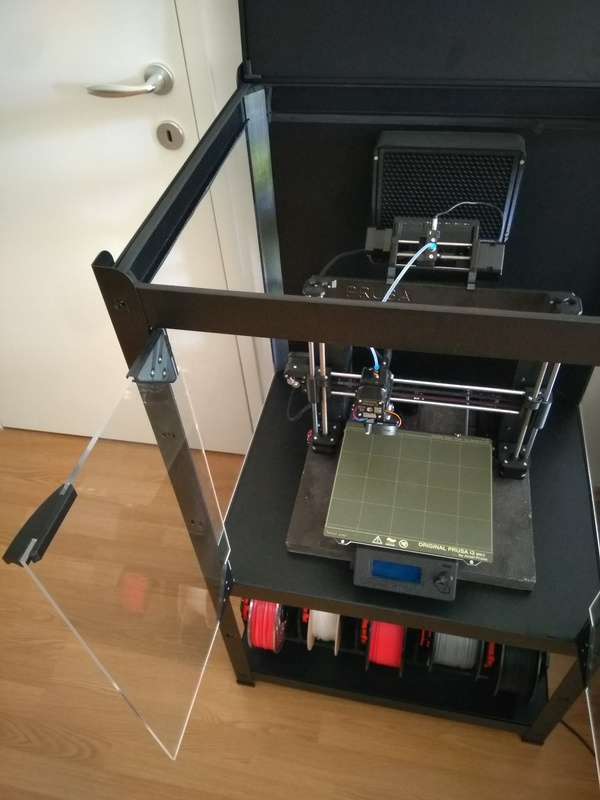 Wow gorgeous build! Nicely done! Yes the LACK is pretty poor quality, a glorified cardboard box as you stated, but just so damn cheap $ wise. And the step-by-step guide helped a lot as I am really not a builder and didn't want to go through trial and error as it already requires printing a myriad of parts.

You are perfectly right about the LACK enclosure. I was on the brink of building one myself but in the end it was the safety concerns which made me look for alternatives (even if my design isn't perfect in that regard either). Only 5 months later I feel confident to call it somewhat complete 😉

The full step-by-step manual from PRUSA makes it much easier to build the LACK enclosure. Also the material itself is much easier to work with. Working with steel, even if it is relatively thin plates, is just something else than cutting and drilling through "glorified cardboard". For the air ventilation I used a powertool jigsaw. Maybe you can do it manually as well but it certainly will be a pain. My design was also quite a bit more complicated to assemble. The most important thing was however that it certainly needed its fair share of trial and error, especially the doors.

You really have to see such a project along the lines: The journey is the award. If you just want an enclosure its better look for a tried and tested concept.

I can try to make the models for the base construction availabe but I have to rework them as I constructed it a bit in "Wintergatan style", ie some parts aren't really exactly what they were when printed.

Keep also in mind that by using my design, you also need access to a laser cutter.

Ok, I finally got it. This is my first attempt of suppling instructions for my BROR enclosure. Well, there are not much instructions included yet, but I have uploaded all the stl files, where I removed the major isues I remembered and created a purchase list to build the basic version of the enclosure.

Finally, I have also included assembly instructions for my BROR enclosure V1.

A link to the PDF file can now be found in my prusaprinters entry:
https://www.prusaprinters.org/prints/34759-bror-enclosure-v1