Just assembled the MMU2S for my MK3S.

Everything works, except the tip shape is nonfunctional 90% of the time. That is, during unload the tip either catches at the entrance of the tube (can't even get pulled in), or later at the first sharper bend. In the latter case I can kind of force it to get unloaded by pulling on the filament manually; if I don't do that the unloading gear in the MMU just grinds it up.

When I first tried I still had a 0.6mm nozzle installed; I switched to a 0.4mm nozzle but that didn't change do anything.

That's how they look: 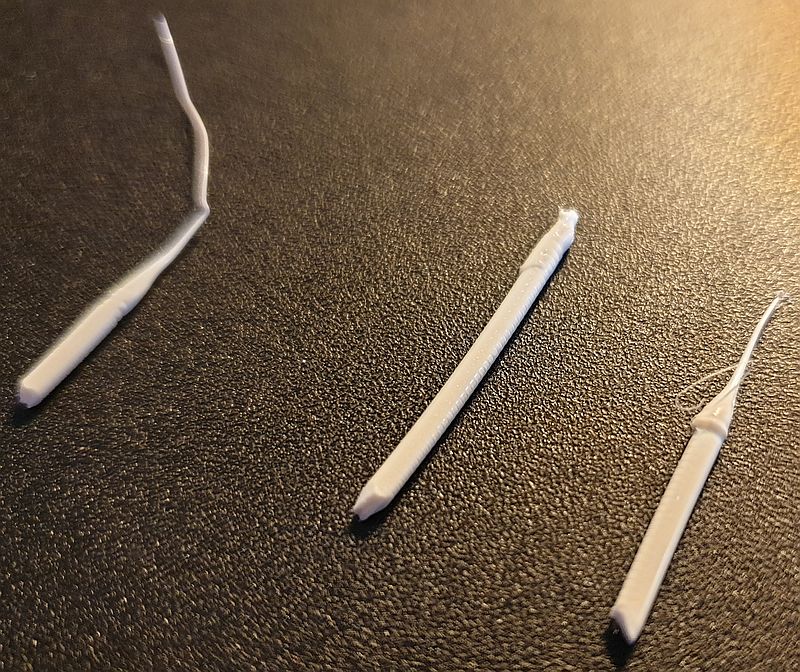 The one to the left was a very rare good one (ignoring the stringing).

The other two are what I'm talking about. Pretty thick at the end. The one to the right is interesting: it seems to have the "good" cone shape at the beginning (and a string, nevermind that...), but towards the back there is a massive ridge.

Does this spark any idea for you? Any particular thing I should be looking at? I'm not yet playing with slicer settings; these are all just from the manual load/unload operations via the LCD screen. PLA, 215° (I played with 230° as the manual suggests to vary temperature, but that didn't help).

The MK3S has been in use for a year and has printed without any trouble until right before the MMU2S assembly.

The *loading* works flawlessly with a freshly cut filament.

The same happens with other filaments (all PLA, other vendors).