I'm trying to print the Lack enclosure for the MK3s. I've been successful in printing the upper parts and the PSU holder (with the same reel of filament!), but for some reason printing the bottom pieces of the enclosure is giving me headaches!

I'm printing with Amazon Basics white PETG filament with the default Prusa Generic PETG 0.15mm Quality settings, but I've slowed down the speed of the print to 75% and slowed the extrusion speed down to about 80%. I've adjusted the first layer Z height to 0.04mm.

Here are the results of those settings: 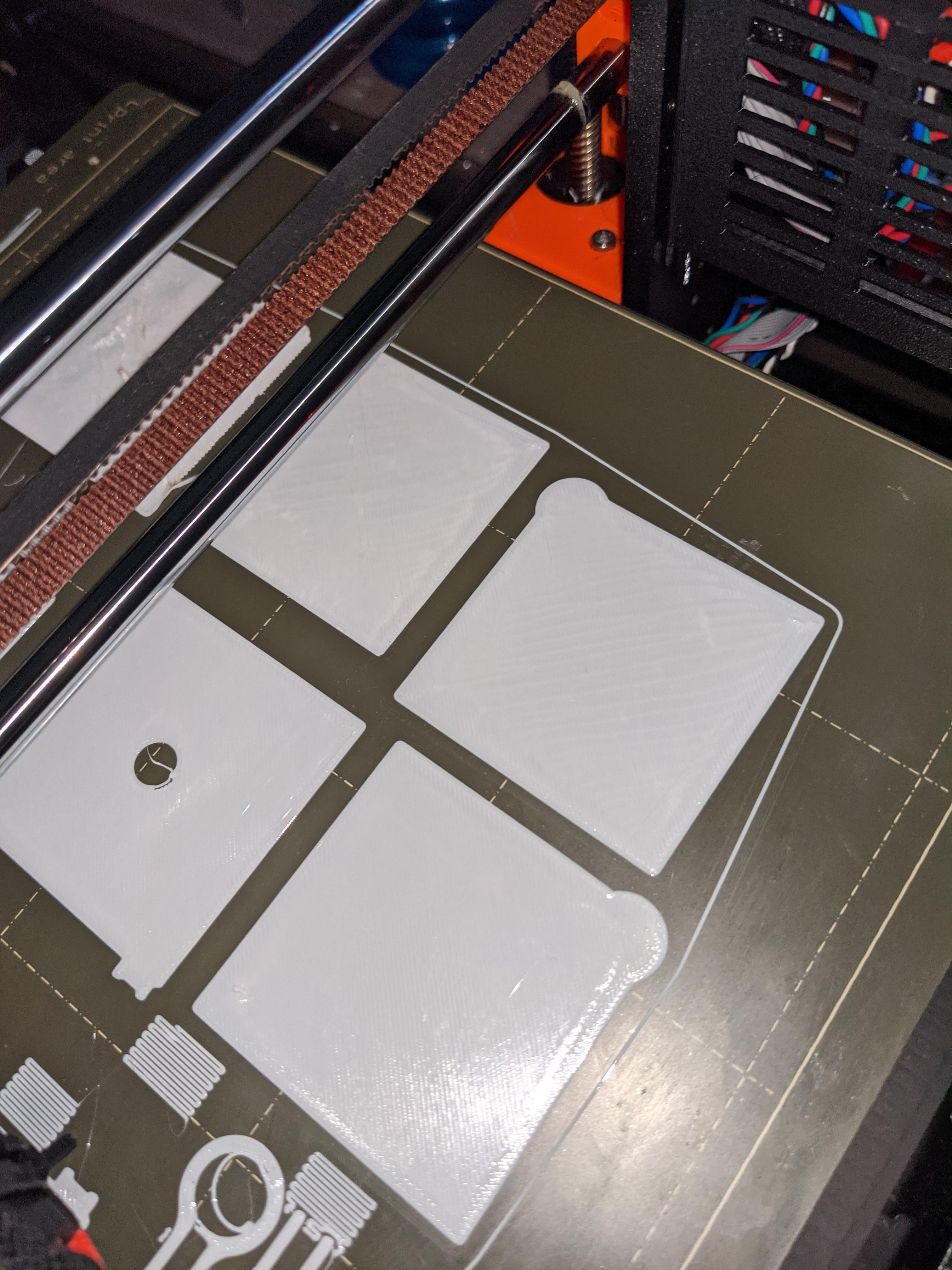 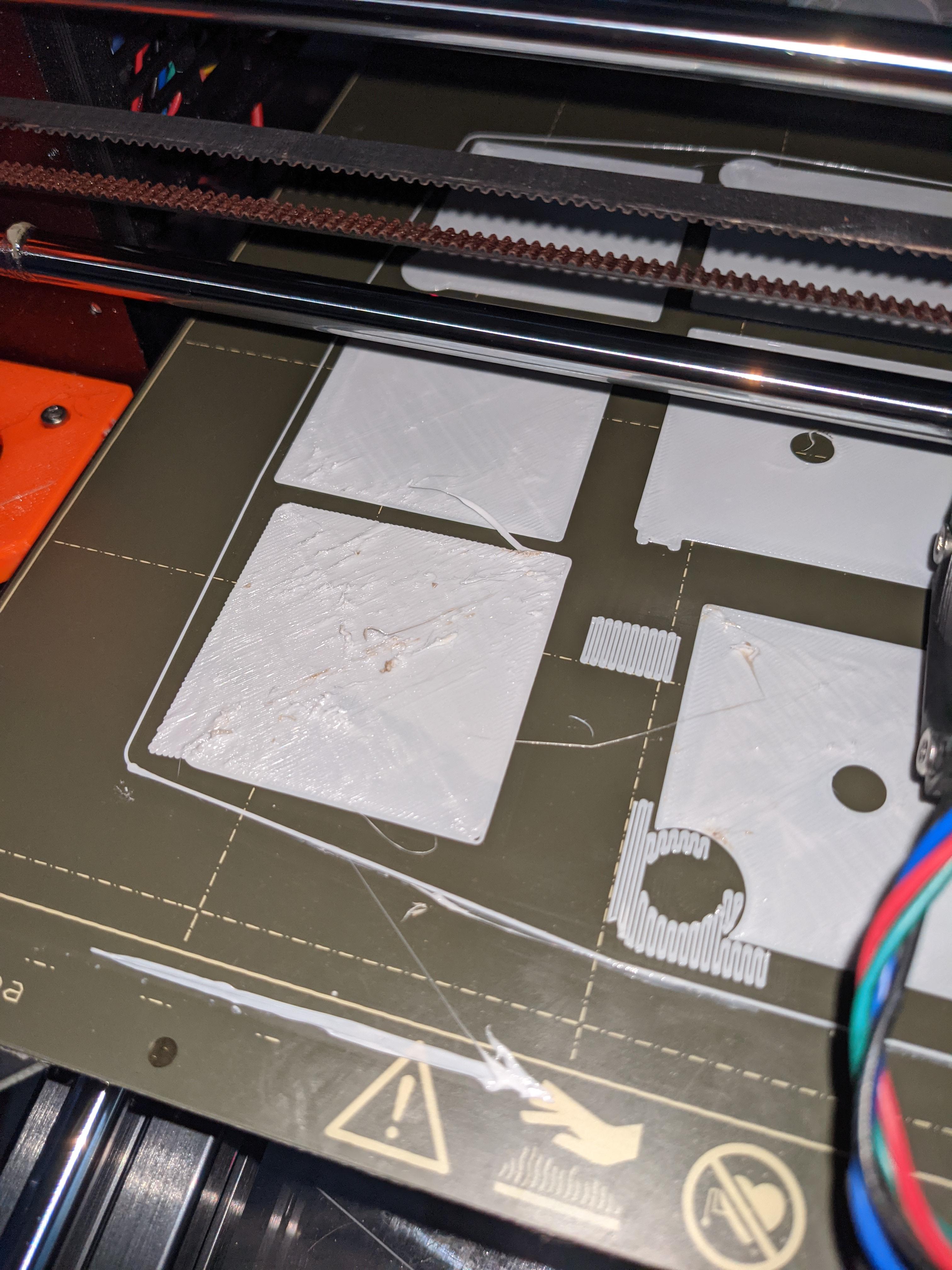 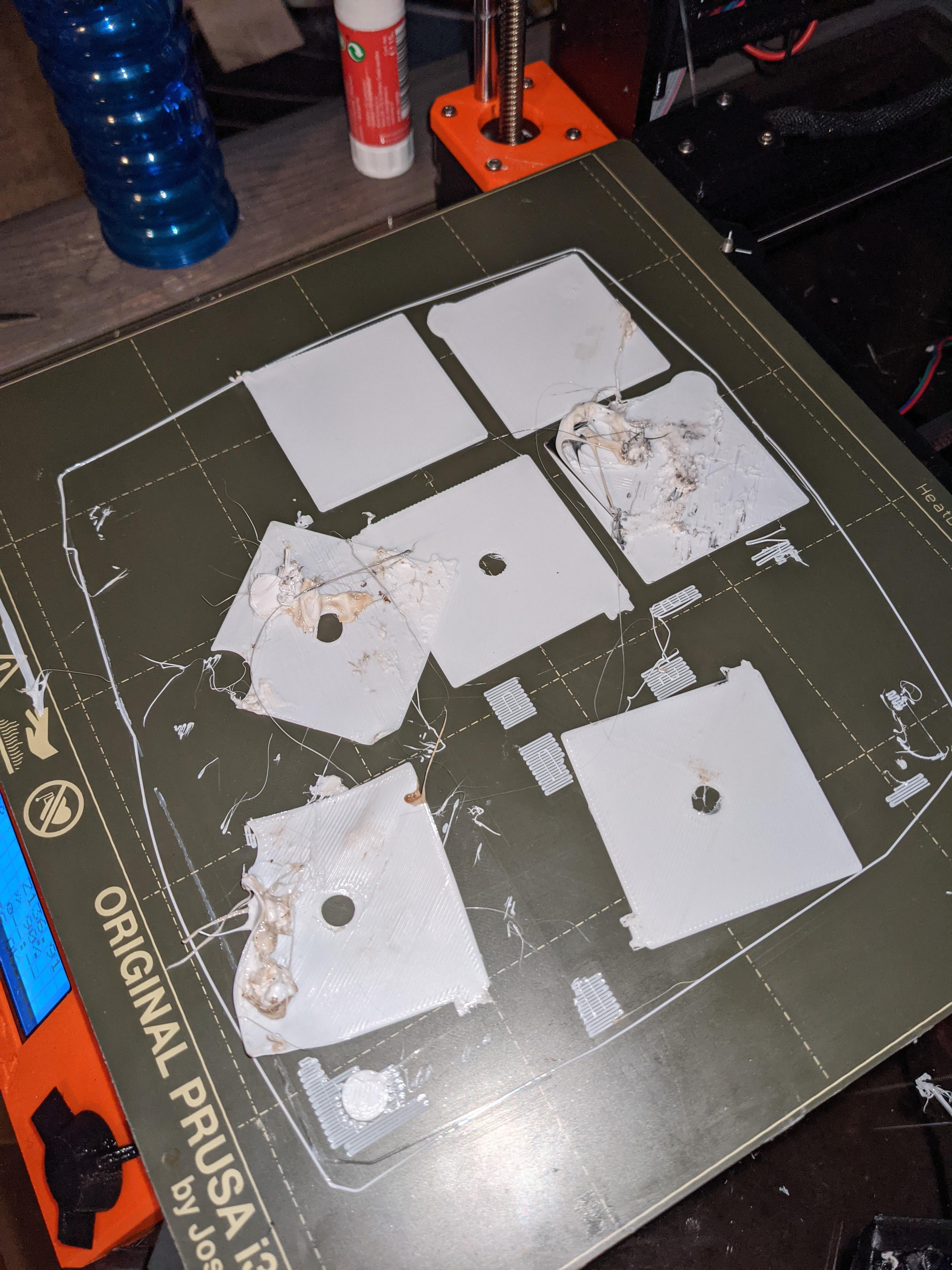 I'd really like some help on what I'm doing wrong here!

For the record, when I let it run "full blast," it looks like the filament extrudes way too fast. The nozzle ends up laying down filament into regions that already have a bit of filament there, such that about 25% of the extruded plastic sits atop filament that has already been laid down.

Do a z calibration, to be safe.

Your first layer calibrations looks to low, I see waving filament(first picture), or bed is not clean.

Print a few squares so you can test first layer calibration, start to high and lower it by small steps.

Your 1st layer looks a bit low. Those extrusions should go down smoothly and not disrupt the adjacent lines.  As layers bunch up, they can protrude up into the path of the nozzle, creating distortions and grabbing still more filament, eventually accumulating on the nozzle and heater block. PETG doesn't require as much 1st layer squish as PLA, so it's common to raise Live-Z (make it less negative) by 0.02-0.2mm compared to PLA levels. 0.15mm is a pretty fine layer line for a functional print. Thinner layers are more susceptible to accumulating problems. You might try a higher layer height.

My notes and disclaimers on 3D printing and miscellaneous other tech projects
He is intelligent, but not experienced. His pattern indicates two dimensional thinking. -- Spock in Star Trek: The Wrath of Khan...
Log in to be able to post
Posted : 21/02/2021 5:35 am
alexb liked

I will share my experience on the very same issue which I have solved at this point.

I'm using Paramount3D PETG.  I decided to standardize on this brand since I like the colors and it seems like a more premier quality product.

So when I first started printing with this stuff I had my zOffset way off, like WAY off.   So with the help of another member of this forum, I got that straightened out.   I was at -.043 when I should have been at -0.298 or so.   Which means I was WAY high, and nothing stuck to the build plate.  I resorted to painters tape plus glue and super wide first layer extrusion width just to get anything to stick.

Anyway.  Once I got the zOffset dialed in, and could get a really nice first layer, I started trying to print stuff with the PETG.   It was there that I ran into the same issue you are having.  I spent a week trying to print a model for my wife only to have the models get 6h in and start showing that issue.

The solution to all this after getting the zOffset thing squared away was the extrusion multiplier.   Since prusa slicer didn't have a profile for paramount, I started with the generic and worked back.   The default multiplier of 1 is too much for the paramount.  If you watch your print from the side, where you can see the nozzle from just after the first layer completes, you might even see that a small amount of material starts to accumulate around the nozzle.  Depending on how much you're over-extruding this could take HOURS.  That buildup will eventually drop onto your model.  So in my case I did many test prints and slowly backed down the extrusion multiplier.   I ended up with a .88 multiplier.  I just did a large print yesterday that had run overnight with those settings.  I think I could even do .87.

I would make yourself a calibration square model that's one layer high.  This is basically what the life z adjust method is doing.  it's a 75mm square that's one layer high.  Use this to calibrate Z so that your first layer comes up in a single sheet.  Once you've figured out that zOffset I'd extrude that up to maybe 5mm high to turn it into a slab.   Print that with your petg and that zOffset.  Watch the nozzle from the side very carefully.  Check to see if there's any noticeable buildup.   if there is, use the tune->flow  option on the printer to to adjust the flow down 1%.  Watch it for some time and repeat if necessary.   If the build up doesn't continue to grow, reprint the whole thing with the that flow plugged into the filament settings.  In my case the right setting seemed to be 88% flow, so that becomes .88 extrusion multiplier.  The goal here is to have the flow right right the start and not see any buildup on the nozzle during the print.

And I can't agree enough about cleaning the bed with dish soap.  I use dawn platinum.  And for PETG you should get some original windex and spray the clean bed and wipe off the excess leaving a thin wet layer that will quickly dry.  This acts as a release agent for PETG which can stick TOO well to your PEI build plate.

Anyway, hope that helps.  it was a long painful journey for me to finally figure that out.

I took y'all's advice and re-calibrated Z. You guys were right; my Z offset was far too low. After creating a calibration slab, my live Z went from -0.955mm to -0.585mm, so definitely squished. Maybe even too squished for PLA, but that was a much more forgiving material. I'm now getting through the first Z layer like a champ. Had some issues with the filament not sticking to the bed in the first layer but a glue stick cleared that right up.

I put my layer height at 0.2mm, which is just half the diameter of the nozzle - what layer height would you suggest if this is still too fine a resolution for PETG? None of the presets built into slic3r are greater than 0.2mm layer height but that doesn't mean it can't be done... curious about your thoughts.

I actually thought this was the next issue I was running into. So, I performed the steps outlined here - my cube's wall came out to 0.41mm thick according to my calipers (±0.01mm). Going by the formula in that page, I set my multiplier to 1.09, printed the cube again, and got the expected 0.45mm thick wall. Prusa seems to think this is what my extrusion multiplier should be.

The infuriating thing is that the second calibration cube had a big glob of snot about 2/3 of the way up the wall and roughly 15mm long on a single layer, similar to the snot pictured below (Didn't get a pic of that before I tossed the cubes), leading me to believe something is wrong with the consistency of the filament, or speed of extrusion, or... something else??? The calibration cube is printed in vase mode, so there aren't any adjacent perimeters to crash into. It's _exactly_ 40mm (±0.005mm) on each side IRL. The printer is doing exactly what I tell it to with crazy tight tolerances (despite me having no idea what I'm doing).

Here are some more photos of attempting to print the Lack enclosure bottom corners after doing the following:

The printer halted because it detected a crash - likely due to that wad of snot in the middle there.

Note the white fan shroud on my extruder - I printed that just fine TODAY. The crash pictured in the original post ruined my original fan shroud. 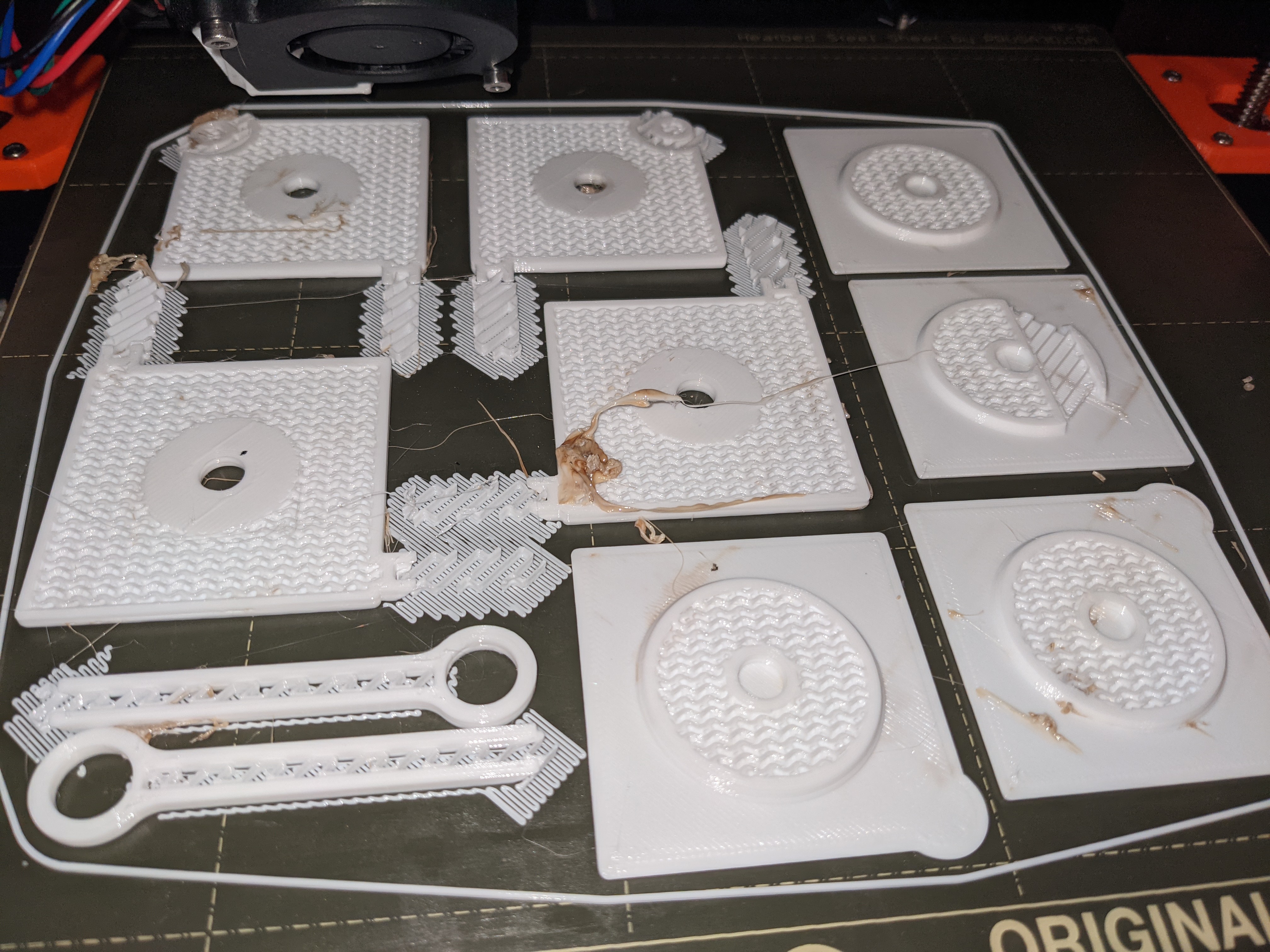 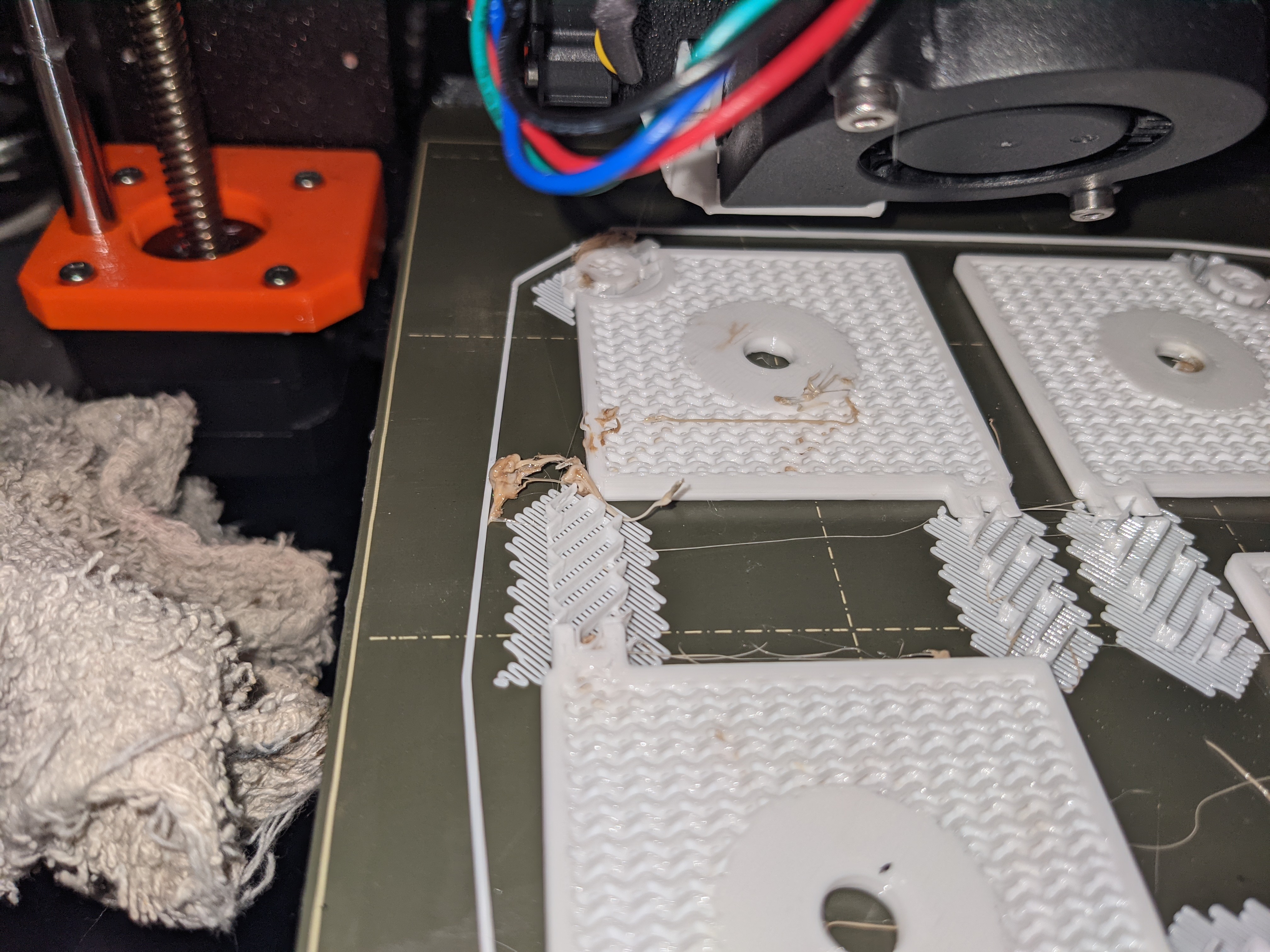 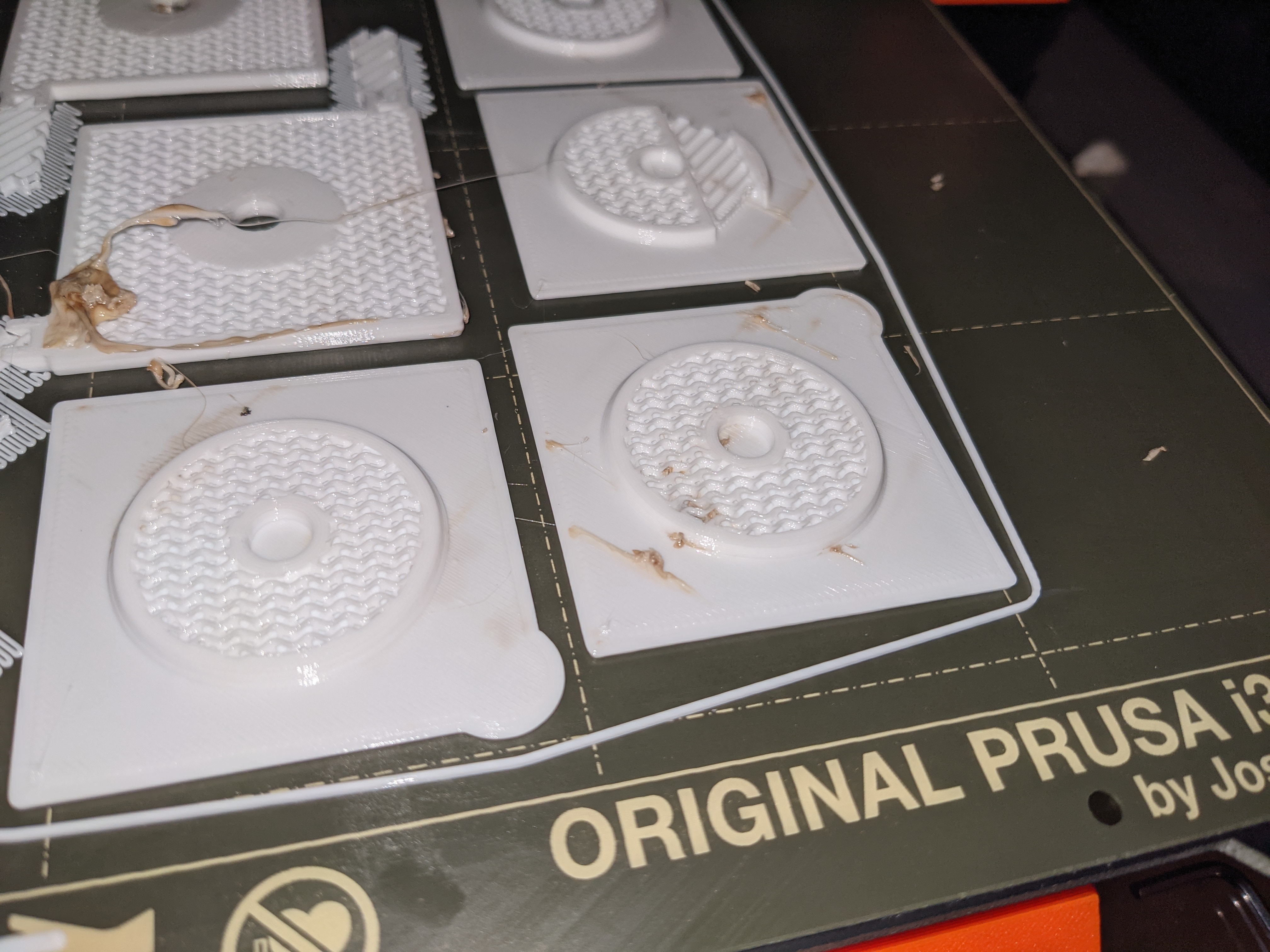 this is so eerily reminiscent of the issue I saw with the paramount which is why I suggested it.  when you're printing a multi-layer calibration slab and you're seeing extra filament, I'm not sure what else to do other than reducing the flow of filament.  I only know that this worked for me for the paramount stuff.

I'd be happy to attach one of my .3mf files if you're interested in seeing all of my settings.