I think some of this is just a limitation of FFF printing. A lot of things can be tuned for in setting defaults, but there are features that are going to be a challenge. Given the high number of slicer variables, not to mention different printer physical characteristics and filament flavors, small variations of a few tenths of a mm are going to be difficult to eliminate without a bit of tweaking.

Lest anybody thing this is purely a PrusaSlicer or Prusa printer issues, here are a couple of comparison shots. The top was printed on my Mk3 after slicing with Cura, the bottom on my Artillery Sidewinder after slicing with ideaMaker. Both have a noticeable deviation at the transition layer. Both were printed with very conservative settings I normally reserve for miniatures, with maximum speeds around 45mm/s, acceleration at 800mm/s, and jerk at 8mm/s.

My notes and disclaimers on 3D printing and miscellaneous other tech projects
He is intelligent, but not experienced. His pattern indicates two dimensional thinking. -- Spock in Star Trek: The Wrath of Khan...
Log in to be able to post
Posted : 14/12/2020 5:35 am

Very interesting to get confirmation that this effect is also seen with a different combination of slicer/printer.

Still, given that it appears to be very predictable based on geometry of the model I like to believe there is an algorithmic approach to this issue, similar to the idea of using Linear Advance to address artifacts at sharp corners. I would think between slicer and firmware there should be a way to detect these "transition areas" and proactively adjust tool path and filament flow to compensate. Alas, my days of writing code are long gone...

i will try all 7 of my printer models tonight.

I think I know the issue....maybe it's my settings, not sure if anyone of you know the "fix".
STL file: https://drive.google.com/file/d/1qjrq-yZa6fhl9OKLnExPNV0I8JRopGRH/view?usp=sharing

Correct me if I'm wrong but I think this is the culprit. 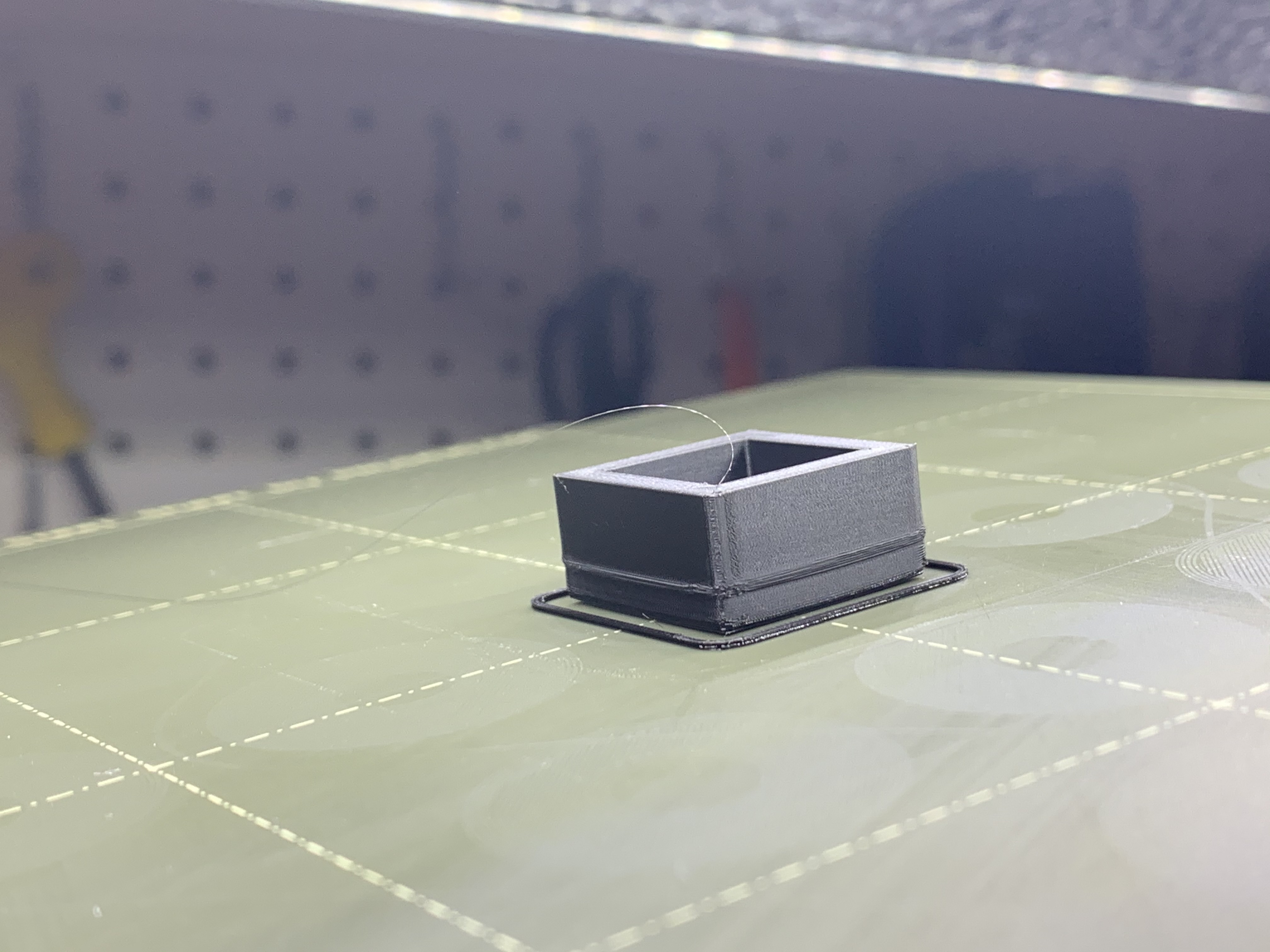 I think, that's the keypoint. I tested a model with the ugly behavior. Result:
Artifacts just on the side, where the solid infill touches the outer lines. Thats because the wall was designed to thin.

I think Prusa knows about that behavior, because they modified the gcode of their benchy in the same way.

Thank you for posting that link.  What Prusa describes is pretty much where I've arrived at based on the past couple of years of struggling with this problem off and on.  So I am heartened that Prusa is seeing similar issues and is working on it while agreeing with them and @Bobstro and others that this is a very difficult multi-variate issue.

A few pages back I posted some findings I had about using my MMU2 unit with a multi-part object and that I had good success with reducing the bulge.  Prusa is saying pretty much a similar thing when they talk about how they modified their Benchy code to ameliorate the hull line issue.  Note that with the multi part tool changes and slicing with MMU2 profiles I think I achieved the same thing as Prusa but without manually adjusting the g-code (not in a Benchy but in my own objects).  This is alluded to by @Swiss_Cheese in the comments to the article in the link by @Hybris.

For those following this issue, it's a known issue with other slicers. Cura is working on their new Arachne engine which is intended to handle varying wall thicknesses better. It's still in early Alpha and not working well yet, but Cura is under very active development. With any luck, they'll find some insights that benefit all slicing engines.

My notes and disclaimers on 3D printing and miscellaneous other tech projects
He is intelligent, but not experienced. His pattern indicates two dimensional thinking. -- Spock in Star Trek: The Wrath of Khan...
Log in to be able to post
Posted : 19/01/2021 7:50 pm

That IS good news! The more devs working on this on more slicers the better.

Another thing to mention here, If you have the knowledge, and care to take the time, this can be tuned out of your prints. it's strange to me that it's become this thing (The Bulge) it's not as though it can't be made to go away. it's the same as a hundred other artifacts that can occur when 3D Printing. There is no make perfect print button, you have always had to tune and adjust settings and models to make different artifacts go away, or at least tune them to an acceptable level.

For those following this issue, it's a known issue with other slicers. Cura is working on their new Arachne engine which is intended to handle varying wall thicknesses better. It's still in early Alpha and not working well yet, but Cura is under very active development. With any luck, they'll find some insights that benefit all slicing engines.

Just a quick note in case someone runs into this:  I have posted a lot on the buldge issue in this thread but just lately I have had a number of prints that were considerably worse.

Not sure it this is related to the latest PrusaSlicer update (2.3.0 - love the monotonic infill btw).  I make a number of custom parts for people that are similar in design but not identical.  I use very similar methodologies with each part to try and minimize the bulge problem.  Several lately have had much worse bulges with it being so bad that there are continuous "blobs" along the bulge line.

The method I am using here is to apply modifier mesh to the section with the 80% triangle infill, thereby getting rid of solid top layers which has helped in the past.  Note that it is not doing this on every part.  Some double up some don't and I have not sussed exactly why at this point.

Just posting this to help anyone analyze the issue if it shows up for you. Hi All, I've been gradually reading through this post in my free time all week, and finally got to the end :). I'm amazed at all the intensely dedicated experimentation and troubleshooting! I've learned quite a bit about slicer settings just by reading this thread even though the issue seems to remain a mystery. I appreciate all the hard work that has gone into figuring this out.

I'm experiencing this issue too with my Ender 3 Pro and SuperSlicer. I have not gone out of my way to do test prints with other settings or slicers. But I did notice something that I don't think has been brought up. Long layer times seem to be directly correlated with the bulge artifact (or at least relatively long layer times; I'm not sure). I recently printed a benchy with a PETG filament that I'm trying for the first time. The bulges are particularly pronounced with this print, or maybe the PETG itself. They seem to occur on long-duration layers. The magnitude of the bulges seem to increase/decrease with layer times too. I hope that pic shows up okay. While certainly interesting, I'm not sure how useful this info is. And forgive me if this has already been brought up. I read the whole thread but it's possible I forgot reading about this 🙂

Also of note is that layer time does not seem to correlate with the bulges that appear around the bridging over holes. I want to add that the layer time correlation also applies to the weird skirt phenomenon rickm shared near the beginning of this thread. A skirt printed around the object also exhibits the bulge despite not making contact with the main object. I think this hasn't been discussed much since around page 4, but my memory may be failing me.

Question... does an internal fillet on the edge of the internal flat surface help?

I just recently upgraded the firmware of my MK3s to the leatest, from a over 1 year old firmware (cant remember version, but it was from november 2019 I believe). I did not have this problem before, but with the latest firmware I to am getting this problem.

So I'm a strong believer in that this is firmware related and that it used to be ok, but is now broken.

On a sidenote; my Mini+ is also having the exact same problem.

Another test print...this time sliced by SuperSlicer...same results.  I've set the print speed for the perimeters the same...and that didn't help either. 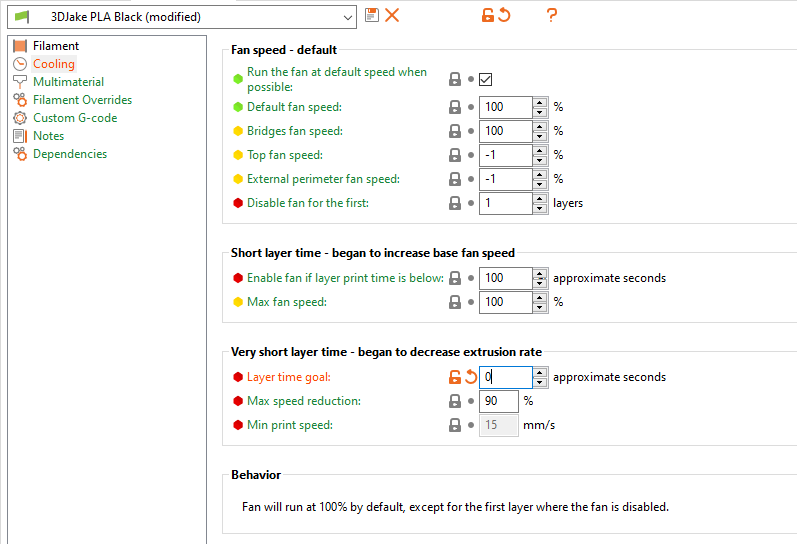 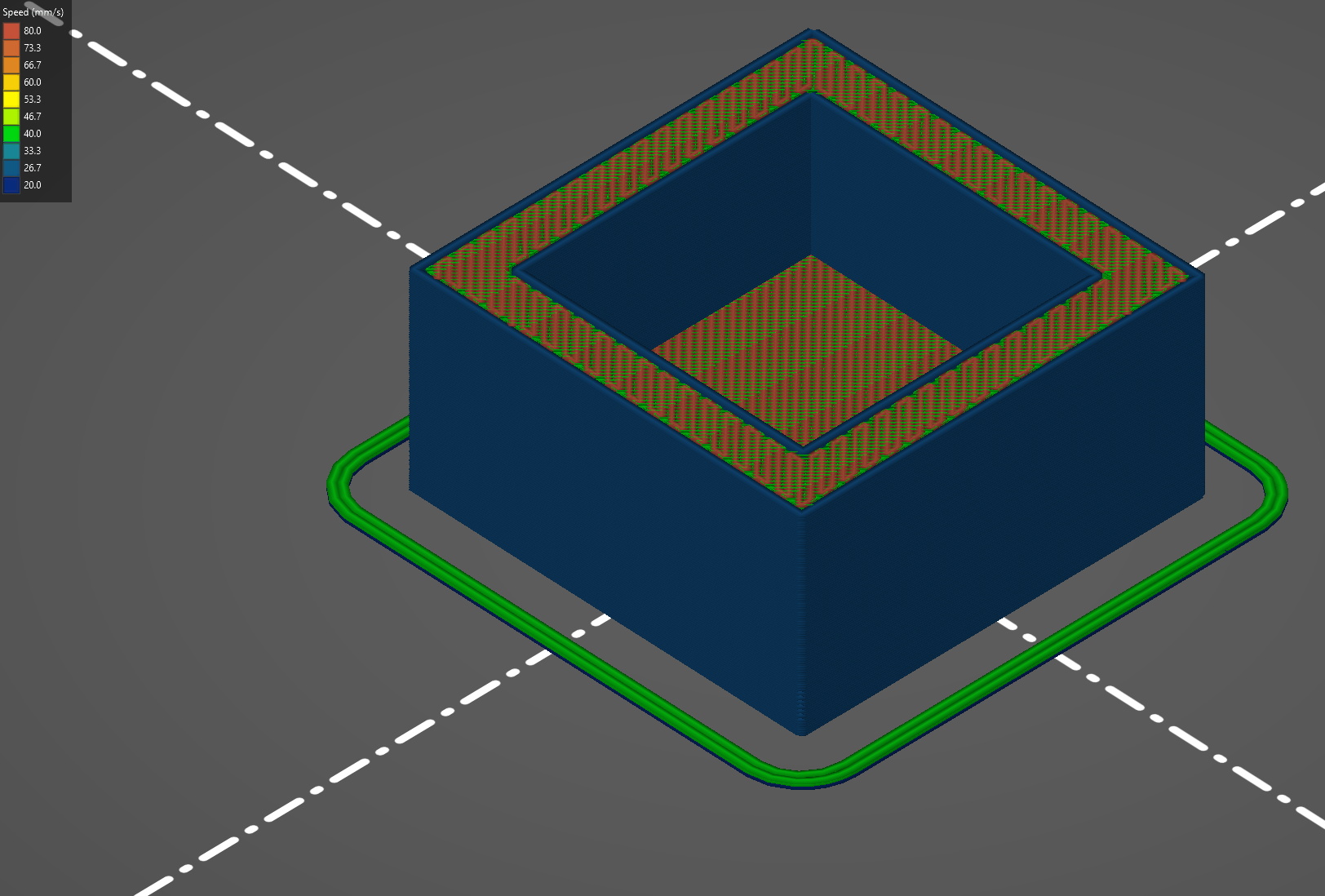 Can you please share the .stl for this?  Trying a few things. 🙂 I also messed with the infill anchor length at 1mm but forget which prints had this set.