Hi guys,
brand new Slic3r Prusa Edition 1.42.0 is out! This is a third beta build intended to test new features. Note that this release is for experienced users 😉

What is new?
This is a third public beta release succeeding multiples of the Slic3r PE 1.42.0 alphas and two betas, introducing a Copy / Paste feature to the 3D scene, improving the SLA mode and fixing many bugs. Compared to the current stable Slic3r PE 1.41.3 release, the Slic3r PE 1.42.0-beta1 features a significantly reworked user interface, new masked SLA support, improved stability and a lot more.

SLA improvements
-> Multiple support point selection is now performed by holding a Control key, it used to be the Shift key. The rectangular selection is performed by holding a Shift key while dragging a mouse holding the left mouse button as before. This is consistent with the handling of the modifier keys on desktop operating systems. A new rectangular deselection mode is performed by holding an Alt key while dragging a mouse holding the left mouse button.
-> SLA gizmo newly provides a clipping plane to enable inspection and editing of supports inside folds and cavities of complex objects. The clipping plane is always kept parallel to the camera, and user may modify distance of the clipping plane from the camera. As of now, the holes in the support structures and in the pad opened by the clipping plane are not yet closed for visualization, though we are working on it #1950.
-> The default SLA support density was increased to 130% of the previous value (100% now works as 130% before). This makes the default supports a bit denser.
-> SLA slicer now allows for correction of expansion or shrinking of the print by applying scaling factors. The new scaling factors are defined at the Printer and Material profiles. In addition, a Gamma correction may be applied to the rasterized images to correct for non-linearities of the display and to correct for the non-linearities of the reaction of the resin to the light exposure #2114.
-> The "Optimize orientation" tool has been improved to try to fit the object into the printer build volume.
-> Slicing export has been optimized for speed.

Other improvements
-> Most icons were replaced with scalable designs, painted exclusively for Slic3r PE. We are still fine tuning contrast of these new icons in some desktop color schemes, so please be patient with us.
-> Copy / Paste now works on objects, parts and modifiers in the 3D scene and in the object list #2092.
-> Multiple objects are now selected in the 3D scene by holding a Control key, it used to be the Shift key. The new behavior is consistent with the selection in the object list, and the Shift key is reserved for a selection of objects by dragging a rectangle.
-> When loading a 3MF or an AMF file containing instances or modifiers, and the Simple mode is active, user is now asked whether he or she wants to cancel loading, or whether he or she wants to switch Slic3r to an Advanced mode, as there is no user interface provided in the Simple mode to control these advanced features.
-> The Plater is newly switched to the preview screen when the "Slice now" button is pressed.
-> Firmware uploader now supports flashing the new SLA Curing and Washing Machine.
-> Extruder can newly be assigned to a model from a 3D scene using object's pop up menu, and extruder can newly be assigned to a group of model volumes or modifiers using a pop up menu from the object list.
-> There is now a new logic for splitting all instances of an object into individual objects: Either drag and drop all instances of an object at the object list to an empty space, or use the pop up menu.
-> Custom bridging angle value is now applied even for infill areas, which are supported from one side only, therefore they were not considered to be bridges before.
-> Windows specific: A new --sw-renderer command line switch has been added to instruct Slic3r to load the MESA software renderer instead of a possibly buggy default OpenGL driver. In addition, the MESA software renderer is loaded by default if Slic3r is started over a Remote Desktop session #2068.
-> Project README was updated, build process documentation was improved, and a Wiki FAQ page was added, thanks @LF.

Bugs fixed
-> Compilation of a command line only Slic3r was restored. Command line only builds are compiled by giving a -DSLIC3R_GUI=no switch to cmake #1348.
-> Linux specific: Fixed crash in Gtk file chooser on some Linux distros when running Slic3r from an AppImage. The issue was caused by mixing two binary non compatible (sic!) libpng libraries. Now we do not bundle libpng anymore, therefore just the system library is loaded and the crash is gone #1703.
-> SLA and FDM slicing has been fixed for mirrored objects, also the Cut by plane did not work for mirrored objects and it is now fixed #1915.
-> After removing all but the last model part from an object, the extruder identifier and other parameter overrides are no more shown at the side bar for the last remaining model part, therefore these parameters are now copied up to the object level to become accessible #1931.
-> Linux specific: CMake build system now supports an option to choose a GTK version #1937.
-> Fixed importing of .AMF files with an undefined object position. Such objects were placed to a zero point of the print bed, they are now auto centered #1998.
-> Linux specific: Fixed assert error on startup #2003 #2005.
-> Fixed layout issues of Support and Infill drop-downs at the Plater on HiDPI displays #2014.
-> Fixed an issue, where the Platter infill and support controls erroneously reseted their respective values in a preset of a loaded project #2021.
-> Fixed side bar layout issues, where the vertical scroll bar sometimes covered content of the side panel #2029.
-> Fixed export of the .SL1 zip archive in case the project name contains non-Latin1 characters. The project name is now also used to name the files packed into the archive, and the project name is stored inside the archive meta data file #2036.
-> Fixed crashes on splitting of some broken models #2042, thanks @SijmenSchoon.
-> Improved scaling of the in the 3D scene dialogs (cut dialog, SLA gizmo dialog) #2043.
-> Fixed FFF layer view for sequential objects #2044.
-> OSX specific: Fixed Variable Layer Heigth cursor highlight in the 3D scene on Retina displays #2050.
-> Fixed "Repair from File menu doesn't save the file" #2064.
-> Fixed Variable Layer Height feature for non-zero rotations of an object #2073.
-> Fixed loss of selection when Place on Face gizmo was active and user clicked on another object #2081.
-> The M73 P100 is now exported at the end of the G-code to correctly convey the "finished print" state to the printer #2082.
-> Fixed inconsistencies in the selection between the 3D scene and the object list. The 3D scene and the object list now both support either an instance selection mode or a part (or modifier) selection mode, where only parts of the same object instance could be selected jointly.
-> Fixed a missing update of the slicing back end after an attribute is deleted from an object or a modifier.
-> Fixed some issues of the SLA gizmo update when switching objects or instances.
---

I hope I am right here to report a problem.

In Slic3r Prusa Edition 1.42.0-beta2 OpenGL 1.1 ist broken. In all alpha versions and beta and beta1 it was working.

After loading an Object only an empty frame is visible.
It looks like everything is working but you cannot see anything. See my (limited) designs on:
PrusaPrinters - https://www.prusaprinters.org/social/1448-sembazuru/prints
Thingiverse - https://www.thingiverse.com/Sembazuru/designs...
Log in to be able to post
Posted : 25/04/2019 8:02 am

aaaugustin
(@aaaugustin)
Active Member
152/5000
Hi,
it somehow convert the output from Slic3r Prusa Edition 1.42.0
on individual lines to .png images to be projected through a projector.

I found an broken backwards compatibility. If in 1.42.3 you save a model with top/bottom fill pattern set ...

My error. I this version number should be 1.41.3. Sorry if anyone was confused. (And I didn't notice until well after the edit-post timeout expired.)

See my (limited) designs on:
PrusaPrinters - https://www.prusaprinters.org/social/1448-sembazuru/prints
Thingiverse - https://www.thingiverse.com/Sembazuru/designs...
Log in to be able to post
Posted : 25/04/2019 7:30 pm

Greetings.
I would like to ask you for a favor,
When printing rings (jewelry) is very good if
at the bottom of the ring, one support is approximately 2mm in diameter (inlet channel). When printing, the ring holds better on the mat and then serves as an inlet channel when casting gold jewelry.
There is always a model in creating Slic3 supports
increased by (5mm - 4mm) and only then the supports are formed.
Is it possible to set the model to prevent the model from being lifted, leaving the inlet channel on the mat?
see picture.

Today I printed the part "extruder-cover.stl" from the i3 MK3 to MK3S upgrade kit ( https://www.prusa3d.com/downloads/others/MK3toMK3s_upgrade_stl.zip) and discovered a hole in a place where I'm sure there shouldn't be one. I checked in slic3r (both 1.41.3 and 1.42.0-beta2) and saw this:

This slicing was done with the option "detect thin walls" active. I turned this option off to verify if there is any diference and surprisingly the result was:

So the result of the activated thin wall detection option is the opposite of what I expected, detection on results in a hole, detection off in none (at least in the slic3r preview, I didn't print the second version already).

Am I doing something wrong or what else could produce this behaviour?

Greetings.
I would like to ask you for a favor, When printing rings (jewelry) is very good if at the bottom of the ring, one support is approximately 2mm in diameter (inlet channel). When  printing, the ring holds better on the mat and then serves as an inlet channel when casting gold jewelry.
There is always a model in creating Slic3 supports increased by (5mm - 4mm) and only then the supports are formed. Is it possible to set the model to prevent the model from being lifted, leaving the inlet channel on the mat?
see picture.

The supports shown don't appear to be Slic3r PE supports. They look more like MeshMixer (or similar). At least, I don't recall seeing any tree supports available in Slic3r.

As a practical matter, if you are slicing a Meshmixer STL,  you can always cut the part at the base of the ring where the fill channel starts.

Hi,
most likely i'm just overlooking it but where are the setting for "wipe to infill" and "wipe to object" for MMU2 prints gone? Having problem with one object, others prints fine but these one always fail at same spot, which can be seen on image, the bob is where printer stop and wait forever. Tried to reslice and reupload but exactly the same happens. 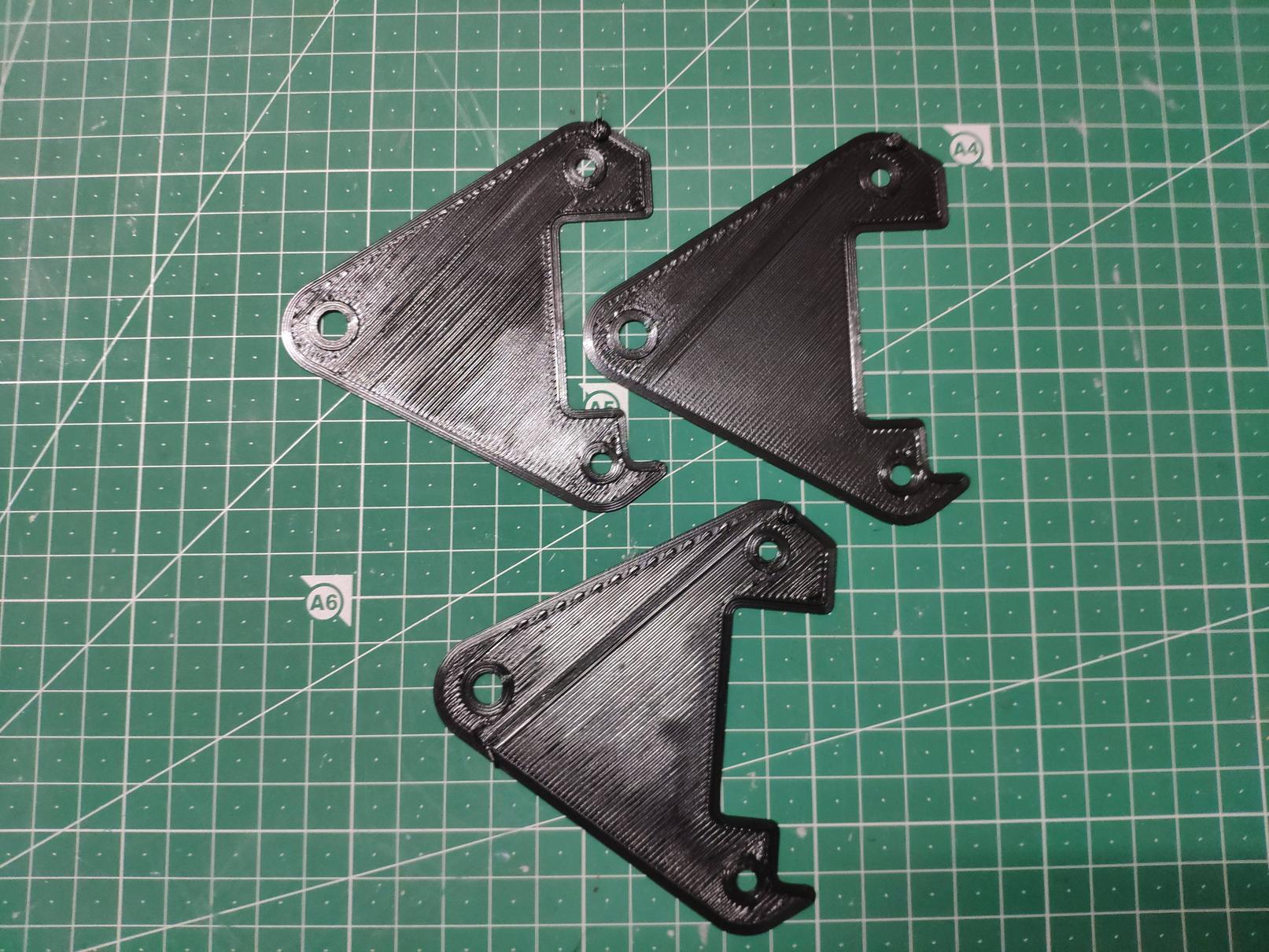 After change to 0.3mm layer preset at slicer it prints OK

Hi,
most likely i'm just overlooking it but where are the setting for "wipe to infill" and "wipe to object" for MMU2 prints gone?

I cannot find it either!

You have to do this for every single object you print, every time.  I wish I could make it the default and then deselect it for objects I do not want it on.