I've read through several threads around this issue, but didn't see any solutions around the issues I'm seeing with a printer I was "gifted" from an old job I had. The printer itself is a Prusa i3 MK2; and I'm almost certain I know the issue, but wanted to see what folks on this forum thought, or if I'm missing something.

While trying to clean a clog, a co-worker broke what I believe was the thermistor wire, directly on the heatblock. Considering this was our backup printer, they let me take it home, and if I could get it working, I could keep it. Score!

The error I'm seeing is the Error: MINTEMP, and from what I've read on this board, is caused by a broken thermistor.

The fix though, I'm not totally clear on. I've watched videos on how to replace a thermistor, which seems straightforward enough. However, I'm not certain how to get the current thermistor probe out of the heatblock, or if that's even the right approach. Any and all suggestions or direction would be super helpful! Is it possible to remove the thermistor probe from the current heat block f the wires broke directly at the heatblock? Do I need to replace the entire heatblock? If so, which parts would be needed for that? Also, I see a lot of places where I can order a replacement thermistor for an MK2, so I was curious what some reputable sites were, as Prusa does not have one available right now.

Also, some links to the fullsize images if they look distorted. I tried to scale down a bit for this board. 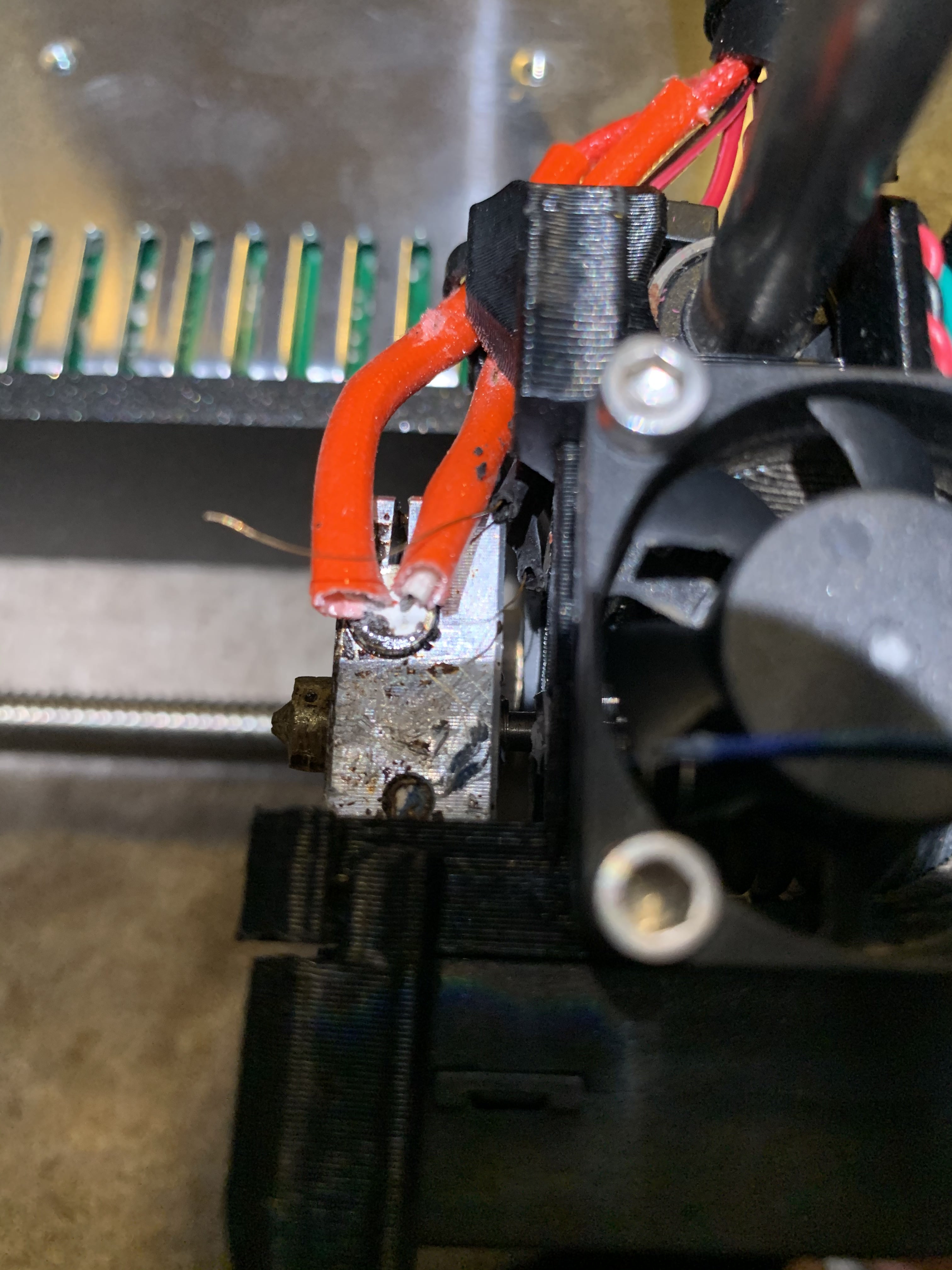 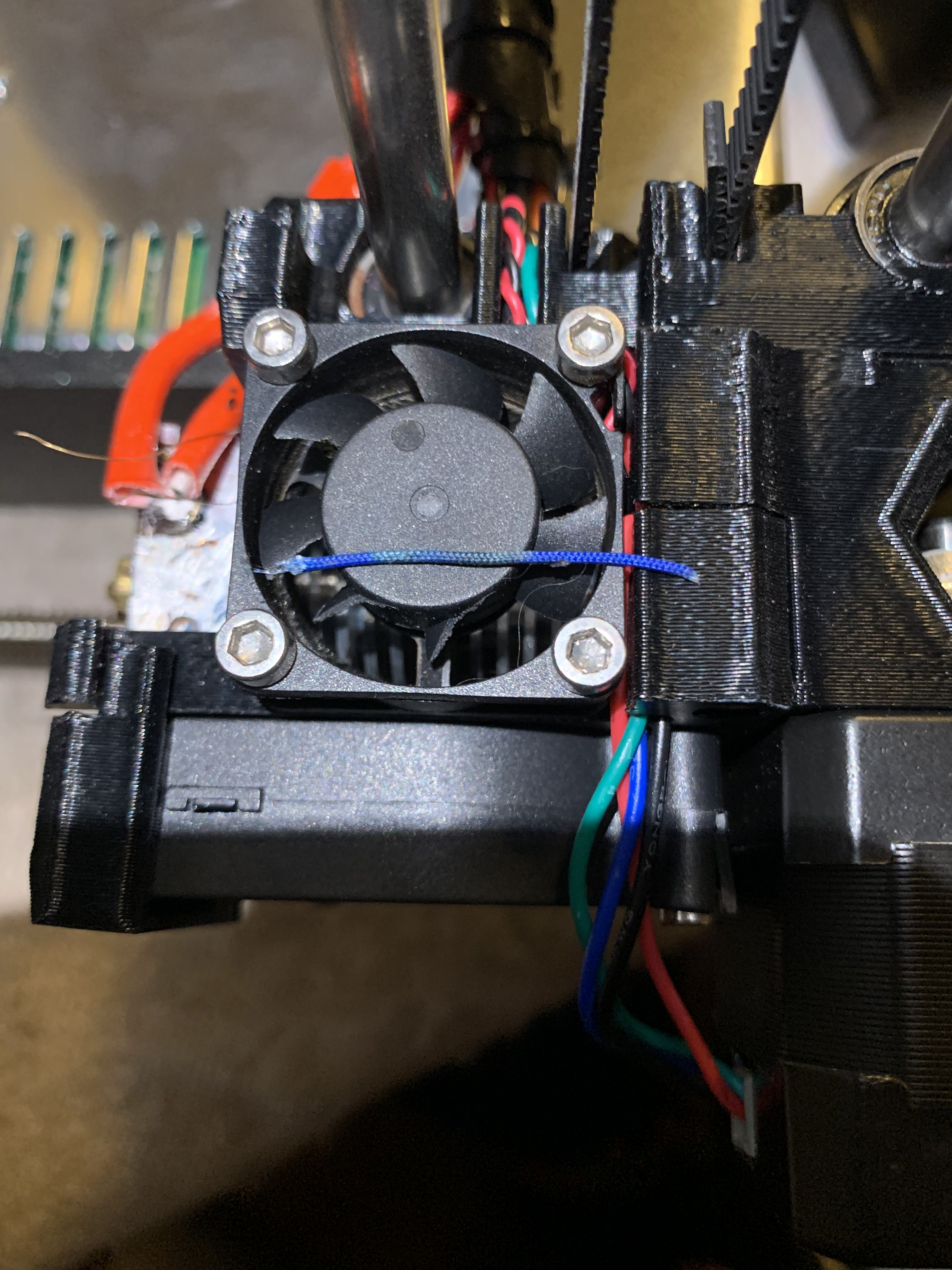 The broken wire and where it connects below it. I believe it's the thermistor. But, if you look closely, there are technically 2 wires broken which used to go into the same hole in the heatblock. Wanted to make sure I'm not missing anything

The wire to the left broken, the blue shield wrapping that was on it, and what I think is the place where the thermistor connects, below the bare wire. Not the most helpful probably, but wanted to include it for clarity if it helps.

You will need to unscrew a tiny grub screw which is embedded inside the Muck on the heatbreak, You might need to heat it up to soften the plastic, if the hotend is still in the printer you may get away with pressing a hot soldering iron against the grub screw hole for about 5 minutes, or until the waste filament on the heater block melts.

is there a serial number sticker on the frame?

If you need Prusa parts, you need to be registered with a prusa account showing ownership of the printer,

Have a word  with the chat helpdesk and hopefully they will transfer the printer to your name.

You may need a new heatblock heater and thermistor, if the thermistor proves difficult to remove  these are available from e3D online, or their resellers,  or on ebay  etc.

the thermistor is a 100K Semitec thermistor in a metal sleeve. the Bead type thermistors were only used on the Mk1 printer, and clones.

I try to make safe suggestions,You should understand the context and ensure you are happy that they are safe before attempting to apply my suggestions, what you do, is YOUR responsibility. Location Halifax UK...
Log in to be able to post
Posted : 16/05/2020 4:39 pm

getting the thermistor and heater out of the block usually ends up with one or both damaged.  the easiest item is to just order new heat block, heater and thermistor as joan suggested.

i've used https://www.filastruder.com/ for many e3d parts since i live in the US.

getting the thermistor and heater out of the block usually ends up with one or both damaged.  the easiest item is to just order new heat block, heater and thermistor as joan suggested.

i've used https://www.filastruder.com/ for many e3d parts since i live in the US.

Seconding this recommendation, at least for your 1st swap. I've added a silicone sock and applied Slice Engineering's boron nitride paste to the thermistor and heater cartridge to aid replacement. Still, having spares of parts with thin brittle wires is a good idea. A spare heatbreak is also a good idea.

I also recommend Filastruder for the spares, along with PrintedSolid, if you're in the US.

My notes and disclaimers on 3D printing and miscellaneous other tech projects
He is intelligent, but not experienced. His pattern indicates two dimensional thinking. -- Spock in Star Trek: The Wrath of Khan...
Log in to be able to post
Posted : 30/05/2020 9:50 pm
All forum topics
Previous Topic
Next Topic
Related Topics
Topic Tags:
Share:
Forum Statistics
372 Forums
31.2 K Topics
227.6 K Posts
59 Online
163.3 K Members