This is the final release of the firmware. This changelog is a summary of the previous release (RC1) with a few additional bug fixes introduced in this release.

Due to historical reasons, the previous firmware releases were using two EEPROM implementations - one provided by stock Marlin, the other for Prusa-specific persistent data. However, this implementation was causing synchronization issues and it was decided to unify both EEPROMs into one. As a result, the support for Marlin's EEPROM is now disabled and upon the reboot, all the Marlin settings are always set to the default values.

Any specific adjustment of those values should be part of the G-code. The only variables from Marlin allowed to be stored in the EEPROM are the Live Adjust Z and PID calibration. The EEPROM further contains Ethernet settings, the filament type and the information, whether the Wizard was successfully finished.

Each variable is now saved independently, unlike in Marlin, where saving one variable resulted in an update to all other variables. The data integrity is now guaranteed by the CRC32. If an error during the check is detected, the EEPROM is set back to the factory defaults, thus the printer has to be calibrated again.

The old and new implementations of the EEPROM are compatible, but only in case of an upgrade. If the user decides for a downgrade from the 4.0.5 to an older firmware a factory reset is recommended.

Starting with this release, there is a brand new web interface called Prusa Connect Local, designed to provide remote monitoring capabilities. The current version provides an overview of the following: 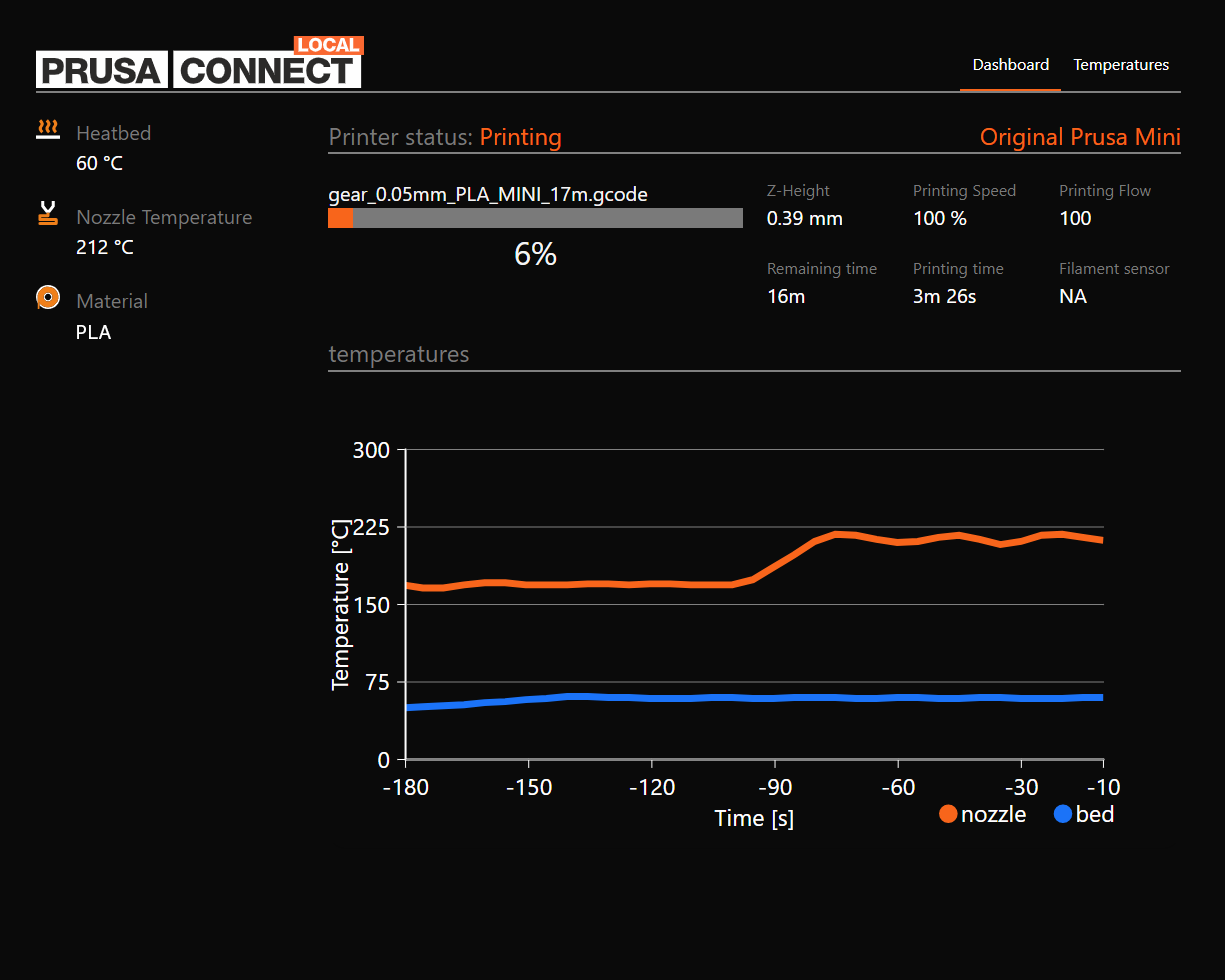 The Stop print function was sometimes using incorrect coordinates while parking the print head or the heatbed, this resulted in multiple attempts to reach the end of the axis and chattering sound. This issue occurred mostly while printing large objects and the printer had to travel longer distances. This is now fixed.

When you start a remote print over OctoPrint, the printer becomes locked and a dialog is displayed on the screen. This is for safety reasons. The only available option is the Tune menu. To access other functions during the remote print, please use the OctoPrint app or web interface. However, in a critical situation, the user is still able to reboot the printer using the hardware button situated under the screen. 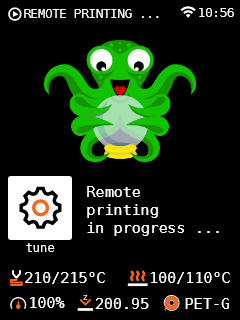 There is a known issue with the filament runout detection or filament change in the G-code (M600). In both scenarios, the print is cancelled. The developers are investigating this issue and it will be addressed with several other improvements in the upcoming release.

In some scenarios, we have observed improper readings during Mesh Bed Levelling (MBL). This can be caused for example by a slightly misaligned print steel sheet. To address this issue and possible errors in the future, the outer edges for the MBL were moved 5 mm towards the center of the heatbed, only the edge closest to the tower (Z-axis) was left intact. The printing area remains unchanged.

In order to improve the clarity of dialog windows, the color scheme of the actively selected buttons was changed to an orange background and black font. A typical example is the YES/NO dialog. 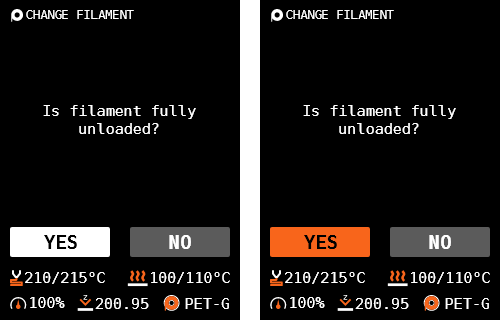 Improved movement near the axis end

In the case of the print head or the heatbed being too close to the edge of its axis, the printer sometimes incorrectly detected the current position and continued the movement with a higher power, forcing the motor to skip a step. The algorithm responsible for the detection of the end of the axis was improved to prevent these situations.

The file sorting algorithm was improved to handle the files on the USB drive based on the time of the last change. Since every operating system (Windows, macOS, Linux) handles this differently, the printer compares the following times (file creation time and file modification time) and selects the most recent one.

Based on the internal testing it was discovered that there is a slight under-extrusion during the print. To compensate for this behavior, the e-steps value was adjusted by 2.5 %.

In some scenarios, the self-test procedure of the Z-axis could have failed. The issue was discovered in incorrect synchronization of the actual printer coordinates obtained during the Auto Home procedure and the software end stops. The synchronization is now fixed and the software end stops were disabled in order to provide stable and reliable self-test.

In very rare scenarios the screen or the knob froze and stopped responding to the user's input. The developers were able to reproduce this issue in the initial Wizard, the preheat menu and during the filament unload. This is now fixed.

How to flash the firmware on MINI:

As always, we wish you happy printing and look forward to your feedback!

Please don't update guys! It's gonna destroy your live-z on first cold print 🙂 I have this on my two MINI's and some other report the same problem.
Downgrade from 4.0.5 doesn't help, also a new MINDA doesn't fix this problem. The issue is still there.

There is a startup G-Code to fix this for now if you have updated to 4.0.5..
-  https://github.com/prusa3d/Prusa-Firmware-Buddy/issues/309

@jakub-d Developers are aware of this i hope? Support doesn't know what to do with this..

There is a known issue with the filament runout detection or filament change in the G-code (M600). In both scenarios, the print is cancelled.

Does this mean filament change AND the filament sensor is broken in the new release?

I upgraded to 4.0.5 and did my first print and it came out just fine- and I didn't even do a z level calibration. (just ran the self test)

Ditto for me. I haven't experienced any issues (keeping fingers crossed).

I think it is only broken when printing through Octoprint. I'm pretty sure this has never worked when using Octoprint. Glad it is being addressed in a future Octoprint release.

Good point, I see that it's below the octoprint image now.

Running 4.0.4 currently, and am in the process of printing dozens of game tiles with 3-4 color changes each via octoprint.  No issues.

I did have some issues with the filament sensor failing to detect a runout, but it has never cancelled the job.  Can't remember if I was using octoprint for those.

I can no longer save the e steps or new PID values? I have installed a bondtech extruder and heatbreak but cant save any of the these values with this new firmware.

I just updated firmware to 4.0.5 and it killed my Mini. Now it randomly stops mid-print and the controls are totally frozen. I tried to downgrade but it's not working. The 4.0.4 bbf file is there on the flash drive and it's the only .bbf file on the flash drive but the printer just boots up with 4.0.5. I even tried the firmware update option in settings but that does nothing either.

Is there some trick to downgrading back to 4.04? I put the 4.04 bbf file on a usb drive that has no other bbf files on it but when I restart the Mini it just fires up with 4.0.5. It doesn't give me an option to update the firmware. I even tried a factory reset but that doesn't help either. Right now my Mini is dead with 4.0.5. It just stops printing randomly with the control panel frozen.

Uh Oh, I have the Bondtech extruder sitting here waiting to be installed. Guess I’ll hold off!

Is there some trick to downgrading back to 4.04? I put the 4.04 bbf file on a usb drive that has no other bbf files on it but when I restart the Mini it just fires up with 4.0.5. It doesn't give me an option to update the firmware. I even tried a factory reset but that doesn't help either. Right now my Mini is dead with 4.0.5. It just stops printing randomly with the control panel frozen.

Found the answer. I didn't realize that, in order to downgrade the firmware, you have to click the dial during the bootloader phase. Of course, since I ran a factory reset trying to fix this I have to run through the whole initial wizard again.

I can no longer save the e steps or new PID values? I have installed a bondtech extruder and heatbreak but cant save any of the these values with this new firmware.

Yeah finding that out the hard way.  Rereading the launch notes looks like we either have rerun the gcode with every print or edit in the slicer.  I also think that the 415 e-step number is no longer valid.  I did a test with petg and it ended up around 432.

How to connect to webUI? Printer shows ip 0.0.0.0, I`ve try to set different settings through ini file, but nothings change...

What is the default e-step value in the new firmware? The changelog just says it was increased 2.5%.

What you are suggesting is we might need to add the e-step g-code in the startup code in PrusaSlicer?

I hope this gets changed. Saving new estep values to calibrate one's extruder is a basic function for 3D printing!

How to connect to webUI? Printer shows ip 0.0.0.0, I`ve try to set different settings through ini file, but nothings change...

How did you connect your printer? Did you connect it to your home router/switch? Do you wish to setup a static address? I connected mine directly to my pc via the ethernet cable. If you provide some further info I'll be glad to help you.

Thanks, I was missing type=static (I`ve put manual :)). Now is working