Learning to print with Glow-in-the-Dark PLA

I'm just starting to work with glow-in-the-dark PLA, specifically Inland Luminescent PLA (If you're not familiar, Inland is a store brand for MicroCenter, a chain of computer and hobby electronics stores in the United States of America. As far as I've learned, the filament is manufactured by eSun). I've had some initial issues which I appear to have worked through, so I thought I'd share here in case anyone else ends up in the same situation.

I am using a hardened steel nozzle (the E3D V6, ordered with my Mk3). I did at least some reading early on and saw that luminescent filament will rapidly wear through a brass nozzle, and I wanted to avoid that. When using the steel nozzle, with either the luminescent PLA or regular PLA, I've found that it works best if I keep the nozzle temperature at 215C for the entire print - if I reduce down to 210, I run into clogging issues, and 220 led to excessive stringing.

I had a devil of a time getting the filament to extrude consistently and to adhere. Inconsistent extrusion would show up as the filament not coming out in a constant volume, and the primary result was much more brittle prints that would separate at the layers. The adhesion problem was especially present when turning corners, where the filament that had just been laid down would pull up as the nozzle changed direction and would then drag along behind, ruining the print.

The solution to both issues has been to reduce print speed way, way down, to only 33%. It's quite slow, but the result has been successful glow-in-the-dark prints, so I shouldn't really complain. 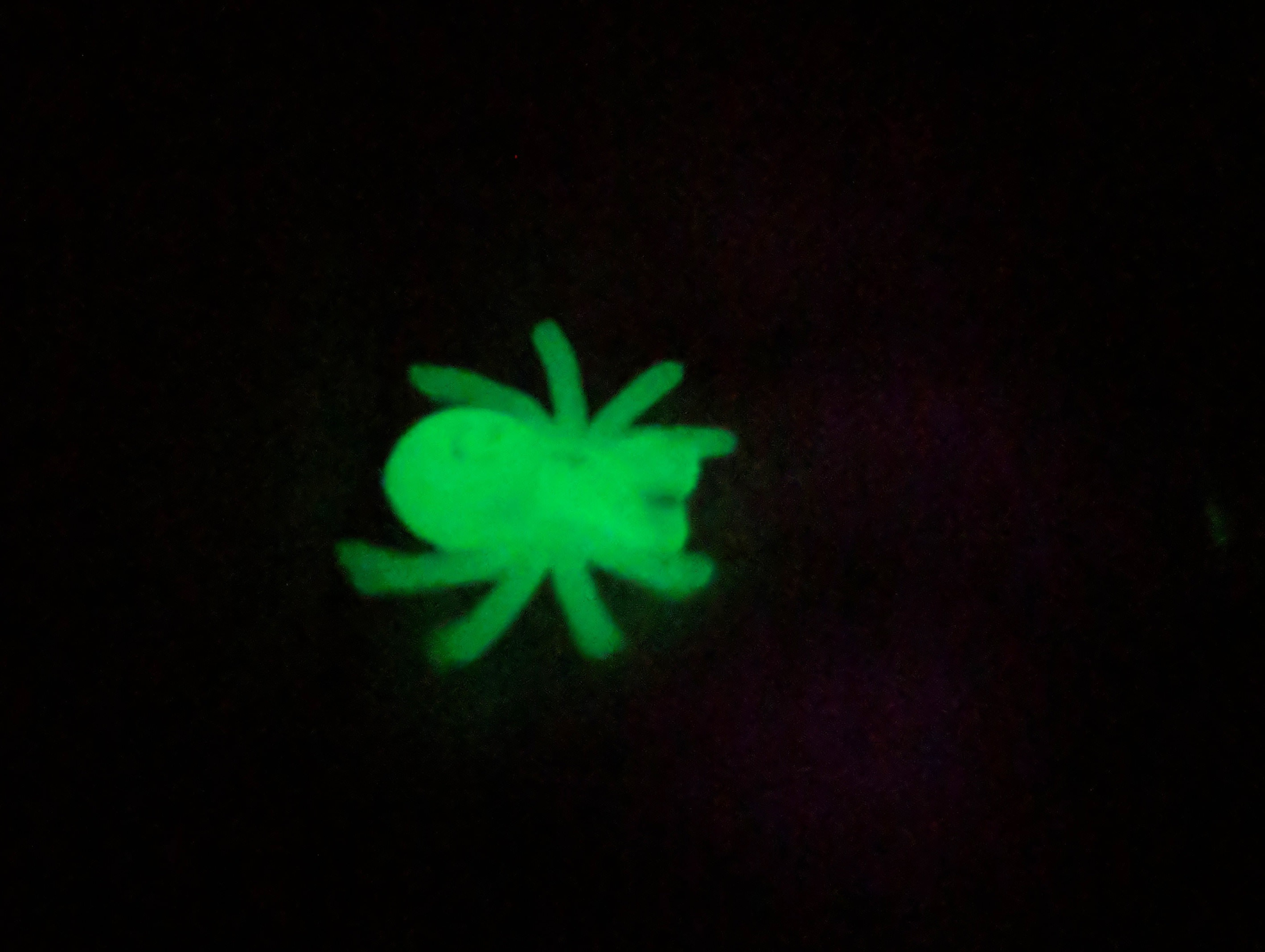 If anyone else is working with glow-in-the-dark PLA, please post any tips you may have. It's an interesting challenge, especially compared to the ease of printing regular PLA.

Only way to print nice prinst in suitable speed is Olson ruby. I bought it and it worth it!

I'm using Das Filament glow in the dark PLA, on a crappy CTC bizer printer, (I'm waiting for my MK3), and haven't noticed any differences in printing it to other PLA. It simply works. With a normal brass nozzle. Absolutely no problem at all.

Glow filament is abrasive, so it will have accelerated wear in your nozzle. But then, nozzles are cheap and need to be replaced occasionally.

Nozzles are also subject to internal blockages and although the "ruby" will not wear out anything like as quickly, they can still get blocked to the point they need replacing, just the same as brass. So I chose to stick with brass for everything.

Please note: I do not have any affiliation with Prusa Research. Any advices given are offered in good faith. It is your responsibility to ensure that by following my advice you do not suffer or cause injury, damage…...
Log in to be able to post
Posted : 09/08/2018 10:47 am

Peter, you are completely right.

First, Glow-PLA should print like any other PLA. If it doesn't, change the manufacturer.

Second: Glow has abrasive qualities, but don't expect to see significant wear on your brass nozzle from normal amounts. My brass nozzle shows no recognizable wear after 0,5-0,75kg of Glow-PLA. No need to spend a lot of money for a Ruby nozzle. Glow is not as abrasive as carbon or metal PLA.

[Edit] I did a bit of readup. On Reddit there are some horror stories about used-up nozzles from glow (after <500g), mine showes absolutely no wear. Perhaps it's the brand of filament, or ... I really don't know.

You can't always tell that there is nozzle wear; it's difficult to measure the difference between 0.4 and 0.5 mm nozzle hole, and then there's the wear inside the nozzle throat which you just can't see. In many instances, the nozzle will print just as it always has, but occasionally you will get bad prints.

Then there's the quality of the nozzle; if you buy originals from E3D, they should last better than Chinese clones.

Please note: I do not have any affiliation with Prusa Research. Any advices given are offered in good faith. It is your responsibility to ensure that by following my advice you do not suffer or cause injury, damage…...
Log in to be able to post
Posted : 13/08/2018 5:43 pm

Sorry to bring back an old thread but I am actually printer shopping and was wondering what all I would need to print with glow filament in a mini+?

I'm OK with replacing a nozzle here and there but if there is a good nozzle that minimizes it I'd like to hear about it.

I'm also wanting to know if there are better brands of glow I need to look for (and any I need to straight up avoid).

I've printed GITD (not on the Mini, however) a sample of Amazon Basics PLA glow-in-the-dark and I agree, it was just like any other generic PLA filament.

I have printed Amolen Glow PLA on both.  No issues.

I've got tungsten carbide nozzle on my mk3s for over a year and printed all types of  material from PC,Asa,PLA  with iron infill and showes absolutely no wear.

+1. I have the Tungsten Carbide nozzle from 3d Maker Engineering and it's fantastic. I print CF and Glow in the Dark with absolutely no problems. No changes in temp or otherwise to run the nozzle.

I'm using the same eSun filament and was suffering the same problems. I have slow speeds set for the first few layers, and then a ramp up to full speed over 5 subsequentlayers. 2 attempts started fine but failed as the speed increased.

Raising nozzle temp and keeping the speed down seems to have addressed the issues.

I will add to my above post that I have a brass nozzle that has been printing abrasives for 3 months with any noticeable wear or change in print quality.  I am doing this as an experiment to see when the print start degrading.  I also have 2 Tungsten carbide nozzles that are a year old and still going.  Time will tell if they are worth the price.